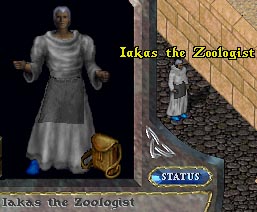 Iakas the Zoologist is a Quest NPC who accepts the three slimed-filled specimen basins to end the quest Pursuit and gives A Certificate Of Capture as a token of his appreciation. He first appeared with Publish 57.

Ostensibly, he can be found at the Royal Britannian Zoo in Moonglow, just south of the moongate and cemetery.

Iakas is a renowned zoologist and teaches at the Royal Britannian Academy of Science. He is currently researching the recent massive appearance of acid slimes and how they may be potentially harvested commerically. He has noted that a coloring agent can be derived from the slimes to act as a pigment for some articles of clothing, armor and weapons. He currently has a field assistant, Lyla the Researcher, who he has charged with procuring samples of the slimes to further his research efforts.

Iakas aspires to emeritus status eventually but still has many years ahead of him in his career. Discovering viable commericial applications from the acid slimes or even conclusively explaining their sudden emergence and profusion would all but assure him tenure at the academy.