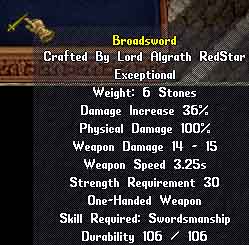 Broadsword with a Maker's Mark

A Maker's Mark is the name of a character inscribed on an item they crafted and is seen among the item's Properties. The maker's mark will usually appear on the item as "Crafted By" and then followed by the character's name.

Adding the maker's mark is optional by the character, but they must possess at least 100.0 points in the skill to be eligible to do so. The choice to mark, not mark or decide at the instant the item is created is set by an option button in the crafting tool's menu.

Not all player-crafted items can hold a maker's mark, but a vast majority can.

If the character has a level of Fame high enough to be a Lord or Lady, the title will be included in the maker's mark.

Maker's marks have undergone changes since Ultima Online was first released. This has led to some old items being considered rarities due to their deprecated maker's marks.