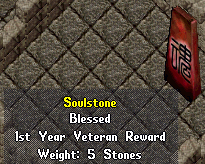 A Soulstone is an item in which a character can store a single skill, then later transfer that skill to another character on the same account.

All Soulstones can only be used with the first account to have held them, but the first two types were distributed in the form of tokens - These tokens can be given or sold to other players before redeeming them for the actual soulstone itself. Red soulstones are not awarded as tokens and thus cannot be traded or sold to another account.

Redepmtion codes from Samurai Empire and Eighth Age no longer work, but tokens already redeemed from those codes will still produce a usable soulstone when used.

While Soulstones have an unlimited number of uses, there are also Soulstone Fragments in 5-charge and craftable, single-use varieties.

A player may only use a Soulstone in a safe log-out location, such as an inn or house that you own or are accessed to. You must wait a certain amount of time after leaving combat to use a stone. Using the stone means storing and then claiming a skill from it or storing and then removing a skill by flushing it from the stone without absorbing it to a character.

If a player would like to transfer a skill from one character to another, he or she must be sure that the skill stored in the soulstone or soulstone fragment does not exceed the skill cap on the target character. You cannot claim a stored skill if it exceeds your skill cap.