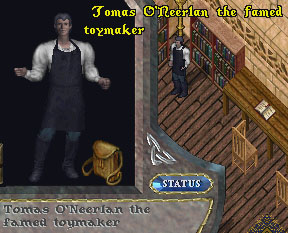 Tomas O'Neerlan is an NPC that lives in the city of Trinsic. Known as The Famed Toymaker, he can be found at the Tinker's Guild located in the northwestern portion of Trinsic.

He is part of the The Collector's Quest and, for a limited time, the Halloween 2009 Quest.