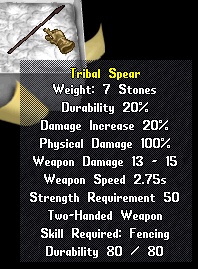 The Tribal Spear is a Two-Handed Weapon for fencers. They are not crafted, but spawn as loot only on the corpses of Savage Riders. One spawns per corpse. It is a bladed weapon that can be used on the corpses of various beasts to produce such items as: feathers, hides, raw birds, raw ribs, scales, and wool.

The tribal spear of today is quite different from versions in UO's past. Though not a magic weapon, it also was not a normal weapon. In a 2001 UOHOC chat, Calandryll_OSI, who was the Lead Content Designer of Ongoing Content at the time, described the tribal spear as "about the same as a spear of force."

Such spears had very low durability and could not be repaired. And according to Calandryll_OSI, at the time durability affected damage inflicted, so users of the spear would notice a damage decrease from a single fight, if it lasted long enough. Because of the durability issues, a character was better off with grandmaster-made spear.