Welcome to the first feature in the new UOGuide editorial section. This is a new feature which will present original commentary, news and other content. The first editorial goes over the new High Seas booster being released on October 12, 2010.

I am excited to write the inaugural piece on what I hope will become a regular and popular addition to UOGuide. With the High Seas upon us, it is only fitting to take a look into what is being added to the game we all love to play. While not a full fledged expansion, the High Seas is giving us content which many have been wishing for since UO launched 13 years ago. 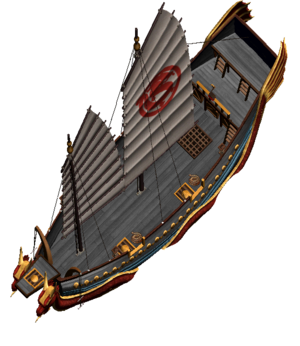 The focus on this expansion is the sea. So it wouldn't be right unless we got some news ships. The developers have created 3 very unique ships types for players to use. But before that, they went ahead and fixed the jerky boat movement which prevented sea additions for over a decade. While it isn't perfect, ship movement is much better than before. Just don't try and move while the ship does =]

There are 3 new ships: an Orcish war ship, a Tokuno fishing vessel and a Gargoyle command galleon. The ships can be used for any purpose, those are just what I think they look like. Each ship has slightly different cannon configuration, hold size, speed, etc.

To attack pirate or merchant ships, you need to use one of the new ship types. Cannons are required to damage NPC ships enough to board.

New ships would be pointless without a reason to use them! Thus you can now find pirate and merchant ships roaming the seas. At the Sea Market, you can get a quest from G.B. Bigglesby to hunt dread pirate captains. You have the option to bring back their head or capture them alive. It is interesting to be given a choice on how to complete your quest.

Using your ship cannons, you have to sufficiently damage enemy ships before you are able to board. Ships will viably show their damage states with holes in the hull and torn sails. Once on board you can finish off the remaining crew with melee combat and loot what the ship was carrying. Typically there are a couple hundred resources, gold and maybe a couple magic items.

Two new champion level creatures can be found on the seas. Corgul the Soulbinder lives on a mysterious floating island which can only be found by obtaining a map to its location. Once there you fight legions of undead pirates, as well as Corgul. It is sort of like a champion spawn, but the champion is out first thing. The spawn stays around for a long time and is a constant nuisance.

Scalis Enforcer appears to be very familiar. I affectionately refer to him as the lobster champ. We tried a couple times on High Seas Test to take him down. But he wiped out our whole party. Scalis is summoned using Fabled Fishing Net. If you attack him from range he will summon eels to attack you.

Each new boss has artifacts and can drop a new Level 7 Treasure Map.

While adding all this other sea related stuff, it was only natural to make improvements to the much neglected Fishing profession. For too long the citizens of Britannia had nothing but plain ol' fish steaks for dinner. Now there are dozens of tasty varieties waiting to be sautéed.

There are dozens of new fish species from Amberjack to Yellowfin Tuna. Some fish can only be caught close to shore, while others are in the deep sea, even more are only found in specific dungeons. There are also Legendary Fish which can only be caught by someone with Legendary Fishing skill (120). Fortunately new fishing Power Scrolls are available through fishing quests. Fish Pies can be made from rare fish and give bonuses when eaten.

At the Sea Market you can accept a quest to catch specific fish. You will be rewarded with Bait, lava fishing equipment or other goodies.

So is this booster worth the price? Going by past expansions, this booster certainly does not have half the content of a Mondain's Legacy or Stygian Abyss which sold for $30. On the other hand it gives you a 20% bonus to house and bank storage, which the uogamecodes.com store currently sells for $20. Then on top of that there are new boats, new boss encounters, and new stuff for fishing.

Going by the poll we had up on the Main Page for over a week now, 75% say they will purchase within a month of release. It is really up to each player whether what this booster offers is worth the money. As for me, I will be buying it.