One quiet and cool morning in the fall of 353, a fleet of ships descended upon their quiet fishing platform. The word of new ship designs has lured adventurers from all over Britannia and made the Sea Market one of the hottest locations around. Master shipwrights had put on sale their new Gargish and Tokuno Ship designs. Once reserved for only fortresses and castles, cannons for the first time are able to go out to sea. Recent advances in ship construction has made the new ships capable of supporting the weight and shock of cannon fire.

There is one crucial ingredient in the manufacture of cannonball firing: Saltpeter. Until now, it was in very low demand due to a lack of war. The Britannian Guard hasn't been in a serious engagement requiring cannons in a dozen years or more. Even so, the demand created by these new ships far outstripped the amount needed for any previous war effort. Demand was so low, saltpeter was only being mined a couple weeks per year! 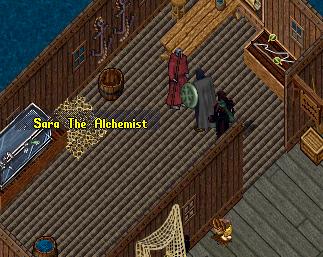 People line up out the door awaiting more supply

Sara the Alchemist recalls the day:

"The sun was starting to poke its head over the horizon and I was just lifting the shades in my shop. Suddenly you could see the mast of a dozen ships followed by the rest a short time later. It looked like an invasion armada, the dock folks had never seen anything like it."

"Within the hour, the dock felt like it was going to collapse under the weight of the crowd. People were being pushed off into the water and boats were slamming into the pier. It was a mad house. First there was a rush to the shipwrights to purchase their new plans. Quite a feat of engineering those are. Then..........they rushed towards my shop."

"Within 30 minutes I had sold my entire supply of saltpeter. An entire year's worth! I sent word to all the alchemy shops in the land requesting more. But most did not even carry the stuff anymore. There hasn't been a war in many years now."

When word spread that there was no way to fire their freshly crafted cannons, it turned ugly. The Britannia Guard had to be called in to keep peace on the docks. Some even turned to piracy in order to obtain saltpeter, which was now valued more than gold. Merchant Ships attempting to deliver new stocks of saltpeter were being plundered, causing even more of a shortage. Dread Pirate Captains were hoarding the supply and attempting to create a black market for themselves.

To stem a new age of pirates, Queen Dawn took unprecedented action. The Royal Guard had enormous strategic stockpiles of saltpeter scattered throughout the world. Years of peace had led to the extreme excess. At the queen's directive, the guard began delivering it to docks in Britain, Skara Brae, Jhelom, Trinsic and Vesper. People cheered as the wagons arrived. Within days the shortage was over and every person who could afford to was wasting cannon shots on anything they could find.

In response to the new demand, several dormant saltpeter mines have begun operating full time. It is expected there will never be a shortage again.

Although the crisis only lasted for a short time, its effects will last for generations. Many new-found pirates dropped their act when the supply was adequate. But a select few still roam about looking for targets to raid. The seas will never be the same. 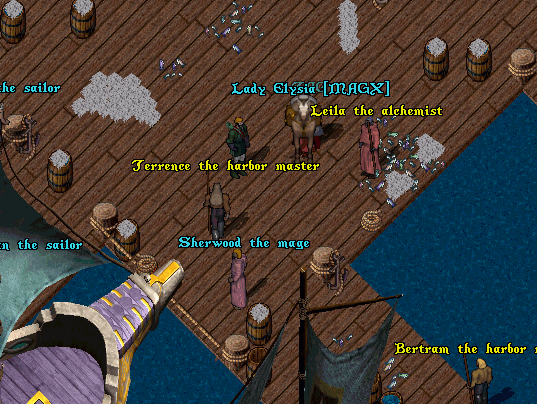