The Geography of UO

Being a treatise on the world and how to navigate it.

The world of Britannia is intended to represent a sphere similar to the planet Earth. However, it is really a flat rectangular world and should you happen to sail off the end of it, you will be magically teleported to the opposite end.

The geometric solid that most accurately represents this behavior is a torus (or a donut shape for those of you who may not be mathematically inclined) but to say that the world is a torus would not be completely accurate because Britannia is exactly the same distance across no matter where on the map you happen to measure it and a torus would demonstrate some warping effect. But no matter, we'll suspend our disbelief for a moment and say that the world is like a donut.

All of this is important to understand because, like Earth, places in Britannia are located using a coordinate system that uses latitudes and longitudes.

On the planet Earth, locations can be identified using a system that divides the world into lines of latitude and longitude.

On Earth, latitude was traditionally determined by using a sextant, a device which, when aimed at the North Star, Polaris, would tell you how many degrees above the Equator you were at. (In southern latitudes you can use the star Sigma Octantis which is the closest star to the southern celestial pole.) Determining longitude is more difficult and requires precise clocks. (This need played an enormous part in advancing science during the early days of global navigation on Earth.)

In Britannia, clocks are only useful for telling time and sextants magically provide longitude as well as latitude, although it appears that the heavens are still in some way involved since they don't work underground.

Enough already! Just tell me how it works!

The center of Britannia's coordinate system is Lord British's throne which is at 0 degrees latitude and 0 degrees longitude.

Due to some strange magic, it was decided that Britannia shall have 360 degrees latitude as well as 360 degrees longitude. This means that, unlike Earth, you can find places in Britannia that are in latitudes greater than 90 degrees north and 90 degrees south.

Furthermore, the degrees wrap when you reach 180. That means that once you pass 180o north, you begin counting down from 180o south. (On Earth this behavior is limited only to longitude since you can't go any farther north than the North Pole.)

Britannia as it's normally viewed.

Britannia with Lord British's throne in the center.

And the Lost Lands? What of them?

The Lost Lands use exactly the same system, except that the center is located in the middle of the Shallow Sea. Also the Lost Lands are much smaller and are surrounded by an impenetrable barrier. Therefore, you can't go far enough from the center for the latitude and longitude values to wrap.

What about Felucca and Trammel?

Beginning with Ultima Online: Renaissance, the world of every UO shard (except Siege Perilous) was divided into two worlds: Felucca and Trammel. (They're named for the two moons of Britannia although, curiously, they don't actually reside on the two moons; they're really more like a pair of linked alternate dimensions.)

Felucca is the older of the two worlds. This is the player vs. player world that has been overrun by Minax and her forces.

Trammel is the newer world. This world is a little more friendly (and therefore, some would say, a little less exciting). Player vs. player actions are strongly regulated.

Both Felucca and Trammel use the exact same world map so you could kind of view them as being two separate shards except for the fact that players can travel between them by using moonstones found throughout the game.

With Ultima Online: Third Dawn, a new land was added to the game: the land of Ilshenar.

Ilshenar uses a completely separate map from the other lands although it shares exactly the same coordinate system.

It is quite a bit smaller than Britannia at roughly one sixth the surface area. 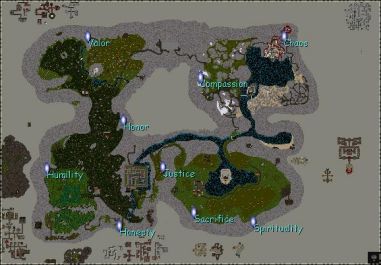 So what are Tile Coordinates?

As has been shown above, latitudes and longitudes are a little cumbersome in Britannia. Particularly when you take into account the fact that the world is made up of a flat rectangular grid of discrete tiles.

Since sextants only give coordinates for places that are above ground, tile coordinates are the only way to identify locations in the dungeons. Also, since all of Britannia and the Lost Lands are really located on the same rectangular map, the same tile coordinate system may be used for both.

For some time, in addition to the normal latitude and longitude readings, sextants also reported these coordinates, along with an additional Z coordinate that gave an indication of altitude (X.Y.Z). In February of 1999 this ability magically disappeared.

UOAM adds a suffix to locations to indicate which world they belong to: (B) for Britannia, (LL) for the Lost Lands.

Locations that can't be expressed in latitude and longitude (areas on the dungeon map) are always displayed in tile coordinates.

Ultima Online's flat rectangular magical teleporting map has another strange characteristic that is worth mentioning. Much like our Earth is made up of different geologic plates separated by fault lines, Britannia is divided up into server zones separated by server boundaries.

A UO shard is managed by a set of game servers. When you cross a server boundary, management of your character is passed from one game server to another. 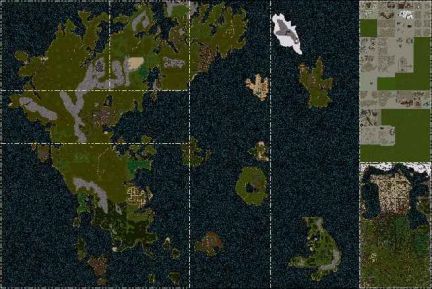 Note that as of this writing, no server boundaries have been discovered in Ilshenar.

I continue to receive requests to post the algorithms to convert from one system to another. Unfortunately the algorithms are a little bit troublesome as they require precise rounding to get exactly the correct results for a given location and the rounding doesn't always work the way you would expect. It took a lot of trial and error to get the routines exactly right.

Unless you are extremely curious and have a relatively high aptitude for algebra, you might want to stop reading right here. It only gets more confusing from here on out.

The easiest way to convert between the two is to use UOAM but for the die hards among us, here you go...

The algorithms presented here are simplified algorithms that will get you close (within a minute or a tile depending on which way you're going).

To convert from tile coordinates to latitude and longitude, run each component through the following formula:

This formula always returns east longitudes and south latitudes and so the result needs to be normalized. If d is greater than 180 or less than 0, you will probably want to adjust it appropriately. (I didn't say it would be easy.)

Here are tables that have values for the constants:

(* Notice that the same values for N are used in both Britannia and the Lost Lands.)

To convert back to tile coordinates, normalize the position so it is expressed in terms of east longitude and south latitude and then run each component through the following formula:

Finally, normalize t to ensure that 0 <= t < N by adding or subtracting N as necessary.

Retrieved from "http://www.uoguide.com/index.php?title=UOAM:geo&oldid=31661"
Category:
The Powerhour