Dark Guardian the Keeper of Knowledge 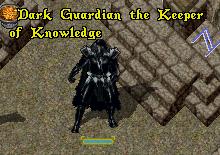 The Dark Guardian is an NPC you encounter in Khaldun dungeon during the Halloween 2008 Quest. You talk to him to learn more about what has happened to Leoric Gathenwale. To reach him you must first obtain the Cursed Tome and dip it in blood. A secret message will be revealed informing you to say the word sarcophagidae inside the central room. The Dark Guardian will appear when you do.