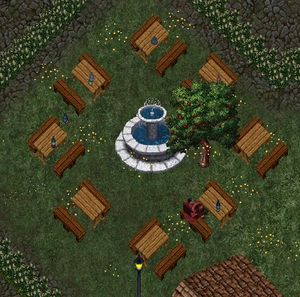 Moonglow Beer Garden is built by the legendary IGM Talos. It is used as a location for various festivities where food and drinks were being served by the Moonglow City Council of the Moonglow Councilors Guild in as late as 2001. It was also an assembly place for the Royal Britannian Guard and for the tournaments held in Valoria and Spiritwood. It is destroyed by the Shadowlords during the Blackrock Detector event in March 28, 2008. Using the snippets of the earlier design, the garden is rebuilt to the same location by EM Emile Layne in 2011.

Moonglow Beer Garden is also the origin of the