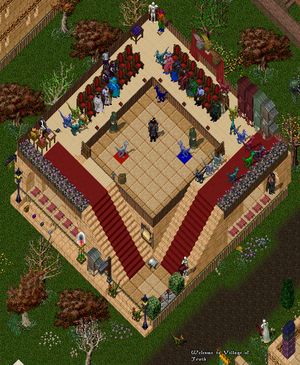 The arena was built by the O*T (Order of Truth) guild, to house the Europa Chicken League fight nights - ECL began with a test match or two in late 2009, opening for the first 'League Season' in January 2010.

Seasons run at 12 matches, on Monday evenings 8 PM UK time (UTC) every second week (the two week gap is to let people have chance to get, hatch, bond and train chicken lizards if they enjoy their first visit!).

We try find a fair match for any pets that owners want to fight, so have a reasonable stable of 'house birds' who are not eligible for prizes. The points system is simple, two birds fight and the winner scores one point. Each eligible bird only gets to fight once per evening, so a perfect season score ( which we have never seen!) would be 12 points. Betting on the fight outcomes is run by the house, and the champions get a suitably engraved statue and appropriate prize at the end of the season.

So far, the league winners have been: