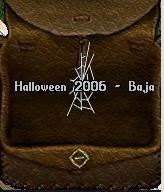 Halloween 2006 - Baja was an EM event item that was handed out by Event Moderators on the Baja shard. The spider web shares the name of the event itself. A total of nine different items were given out at this event.

Players had to run through the Shame dungeon with limited items equipped. Each of the levels were filled with monsters and there were event items scattered throughout. The characters had to locate four NPC "tricksters" and ask for passwords. The passwords were used to find four hidden posts in the dungeon through which character had to pass.