Difference between revisions of "Mini-Champs"

Mini-Champs are a system of progressing spawns similar to the larger Champion Spawns without an altar or special rewards introduced with Stygian Abyss expansion. There are 10 Mini-Champs (13 with Cavern of the Discarded) inside the Stygian Abyss Dungeon.

Creatures of Mini-Champs have specific Imbuing ingredients in their loot.

In order to advance to the next level, you need to slay the number of each creature initially spawned at that particular Level. 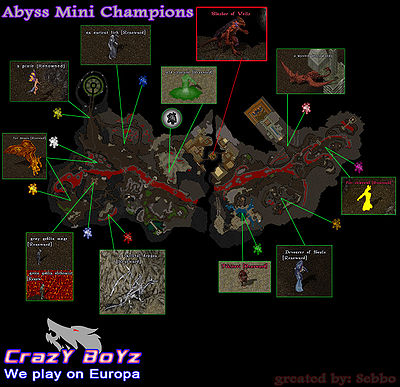 The Lands of the Lich

The Cavern of the Discarded