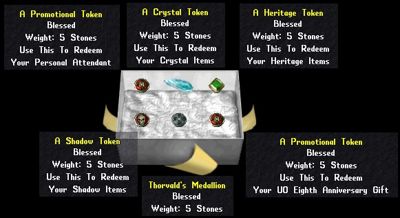 A Token is an in-game consumable item that when double clicked allows a character to claim certain items or effect specific character-based alterations. The graphics used for tokens has varied, and in one instance the original token art is used for a non-consumable, decorative item, Thorvald's Medallion.

Tokens were introduced in [Insert Publish Here], so that players could trade and/or transfer certain soulbound items or services.

Currently, the UO Game Code Store only offers certain tokens for purchase. However, the following is a list of such tokens and token that are now only found on player vendors, in collections, or in-game museums.