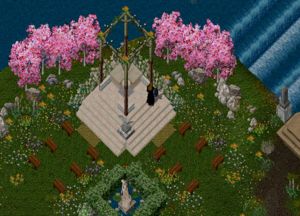 Valentine's Day 2008 was quite the celebration, with the distribution of special gifts, a new romantic venue, and a live scavenger hunt. Rare pink bunnies spawned in a few hues throughout the land and the extremely rare purple bunny made limited appearances.

A special gift box was distributed to characters older than thirty days who logged on during the holiday period. It contained several treasures:

3 New Books of Poetry - NPC Francis the Chapman is an enterprising scribe that sells books and other stationeries inside the Conservatory in Britain. He has recovered a number of poems from the archives of Castle British; apparently from Lord British's personal collection! They contain many strange and beautiful references to lands unknown and places unseen. Struck by their romantic beauty, Francis has created a collection of the poems, and published them himself in three volumes.

Yew Waterfalls -- Southeast of Justice Island on facet Trammel, next to the waterfalls, a romantic garden has been carefully cultivated for the enjoyment of young couples and lonely poets alike. A new bridge spans the falls, giving unprecedented views of the shimmering cascades of water. The area is now a guard zone to protect the safety of picnickers.

A Valentine's Day Scavenger Hunt was held at the Yew Waterfalls garden. The hunt occured on each shard as follows:

The date also coincided with the new cooking branch, Chocolatiering.