Note: this article is based upon a very good article on Stratics [1], as well as on personal exploration of the quest.

The goal is to find the ship Ararat, which is sunken beneath the waves. Which is cool because it's the only time in Ultima Online that you get to go underwater!

Screen shots from the quest are at the bottom of the page.

Broken Remains of a Shipwreck 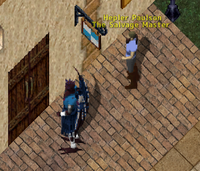 The quest starts in Trinsic. Visit Hepler Paulson the Salvage Master at the Shipwright's.

Click on him and he will tell you of the many recent shipwrecks. He will offer to sell you special gear to help you.

Use the hook in deep water. Double click on it and then on the water. It will sink and then reapear in a few seconds.

It may bring up monsters, and you may have to go back and get more hooks, since they are one-use each. But eventually you'll get the Quest item: Broken Remains of a Shipwreck.

Take this back to Paulson. Since you don't get this as a quest in your journal, you cannot mark it as a quest item. Instead, drag it onto him to get a response.

He will send you on the next step of the quest - East Britain to visit a master tinker. Find the house.

The house is empty but go upstairs to find a book and a scroll. These indicate that Perron was in very cold lands doing research. This leads to...

Cousteau Perron is in the Snow area in Lost Lands. Right next to where the Ice Dungeon tunnel comes out.

Cousteau asks you to bring her some scales from an Ice Wyrm. Note that the one right in Ice Dungeon is a White Wyrm and its scales do not count! Go near to where the Arctic Ogre Lords reside in the southern portion of the Ice Dungeon. The Ice Wyrm is near a set of crystals.

Note that the scale will appear in your backpack when you kill the creature. They are not on its corpse!

Plans to a Salvager Suit

Cousteau will tell you that the plans for the diving suit were last seen in the Sorcerer's Dungeon in Ilshenar. You can get to this dungeon by taking either the Honor Moongate and going north, or the Valor moongate and going south.

Go down to the third level. On the north west side find a big room with a table with a scroll on it.

Read the scroll and follow instructions. You will need to find various reagents. Each of these is not a normal reagent, but a quest item which has a timer on it. Click on a plate, and then click on the quest item in your backpack and you will get the message:

* You place the reagent on the plate and hear an ominous click in the background...*

To get each item, double click on it. You cannot drag it into your backpack, so don't waste time trying that our you may quickly die!

Back to the room with the table. Read the plates and place each reagent on the appropriate one. A lich appears. Kill it and get a key which will open a strong box on the table where the plates are. Open it to get...

Plans to a Salvager suit

Take this to Cousteau Perron back in the ice area. You cannot just click on her, nor just click on the scroll. Take it and drop it onto her. She will thank you then give you a list of four items to collect.

Collecting the Parts of the Suit 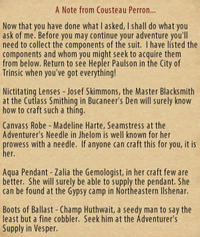 A Note from Cousteau Perron

Cousteau needs many parts in order to make the suit. Get ready to travel!

First go to Bucaneer's Den to find the blacksmith oseph Skimmons. Josef's shop is on the north side of Bucaneer's Den. He can make the lenses, but first needs you to get the schematics to an Orcish machine. They are found inside the Orc Fort near Yew.

Fight your way to find an Orcish Engineer. He will have some random Orc name with "Engineer" in his title, and will be found in the back part of the lower caves near an ore machine. Kill him and the plans will appear in your backpack.

Take the lens to Joseph, drop it on him, and you will get the Nictitating Lens.

At the Adventurer's Needle shop in Jhelom find Madeline Hart. She is mourning for her son, Willem, who disappeared in Destard.

Go to Destard and find Willem's hat! Go past the main area, to the northwest, to a ramp down. Go down this, then immediately down another to get the the third level. Kill an Obsidian Wyvern and Willem's hat will appear in your backpack. Bring it back to madeline, hand it to her and receive the Canvass Robe.

Go to the Desert Outpost Gypsy camp in northeast Ilshenar. There are two, but this is the western one, closest to the undead island bridge. Compassion is the closest moongate.

Zalia asks you to get gold from killing Djinn near the water. Go east along the coast until you see a hammock between two palm trees. The Djinn will appear here. It is not too tough, but will summon about 5 Efreeti to attack you! Once you kill it, the Aqua Gem will appear in your backpack. Give it to Zalia for your reward- the Aqua Pendant.

Next go to Vesper to visit Champ Huthwait. He's not just "The Cobbler", but "The Seedy Cobbler"! He is found in a store called The Adventurer's Supplies. This is the the northwest of downtown, on the mainland.

Champ asks you to take out a Brigand leader named Mercutio. The camp is to the southwest of the city. Kill Mercutio and his Cutlass will appear in your backpack. Hand it to Champ for the Boots of Ballast.

Back to Hepler for the Map

Congratulations! You now have all the pieces of the diving suit! They are blessed, so you should not lose them. They do not decay, so you can used them over and over as you explore the depths.

Now that you have all of the pieces, take them back to Hepler. He gives you a map to Gravewater lake in Umbra. The map is only valid for 1 hour.

Put on the Pendant (head), Lenses (earrings), Robe, and Boots. Note that these work for Gargoyles with no need for alteration. Now walk into the lake!

Go to the whirlpool and click on it to enter an undersea world! Note that you can remove the diving gear once you are on the bottom.

The Wreck of the Ararat

Go to the dock at the lake, equip the suit, and go to the wreck. Step into the whirlpool!

Underwater is a vast cavern with a shipwreck surrounded by monsters- some familiar, some unique to this environment:

On the east side of the ship is a hole. Enter it.

There are rooms filled with barrels. I'm a Mystic, so I cast Bombard on the barrels and it destroyed them in two hits. Other spells did not seem to have any effect. Weapons work, but were slower than the spells for me. Sometimes exploding barrels will damage you with debris, other times poison clouds, rats or sea snakes will appear.

Kill barrels until you find a key- put it in your backpack. Then clear out the barrels around the central area. Seven of the eight barrels surrounding the central locker are invulnerable, but one is not, making a path the locker. Use the key to unlock it and one of the four parts will appear in your backpack. There does not appear to be any pattern to where the key and the locker entry are. There are 80 barrels to chose from!

The two northern rooms are pretty easy, though tedious. The lower two are near a lich spawn. Tedious and dangerous! If you stand in the corner you may be able to avoid their attention.

The items you find are:

Once you have all of these, the winch on the main deck works, and you can go to the center of it, up a platform, and then step into the dark hole!

Then one of the three shadowlords appears:

I have never made it past getting killed by Nosfentor...

Broken Remains of a Shipwreck 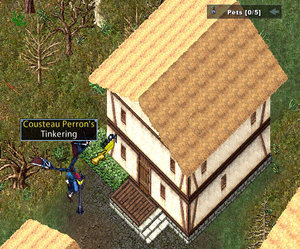 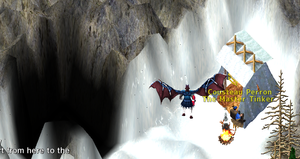 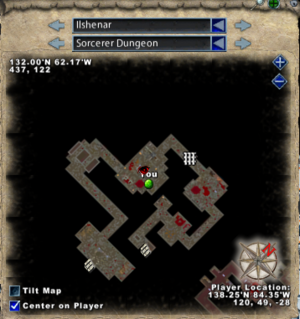