Sea Market (also known as the Floating Emporium or Docktown), is a floating wharf and fishermen village on the seas of Sosaria at coordinates 62० 24`S, 132० 54`W. It was introduced with the High Seas "booster" expansion and is central to much of the sea-related content such as the new fishing quests, pirate bounty quests, Galleons and Boat Paint. The Sea Market exists on both Trammel and Felucca facets.

The sea market does not allow runes to be marked on the platform. You will either need to sail there or hop inside a reverse gate. If you decide to sail to the market there are several potential starting locations. The market is located nearly equi-distant from the south end of Moonglow, the north shore of Fire Isle, the east edge of Magincia, the east edge of Haven/Ocllo, and the west coast of Skara Brae. 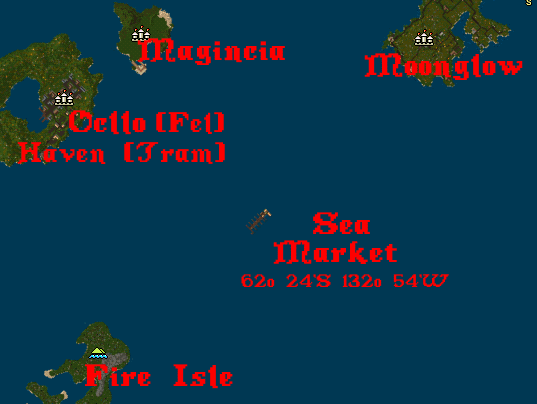 There is a 10 minute time for Boats to stay at the Sea Market dock. After five minutes, if the ship is unattaneded, the owner will receive a message the ship will be moved from the area every minute. The boat will not be teleported if a player is aboard. Standing on the boat for one minute will refresh the timer. If the unatteneded timer expires, the boat will be teleported to a short distance from the market and the owner will receive the message "A strong tide comes and carries your boat to deeper water."

Although Sea Market is far out at sea from land, fishing from the dockside is not Deep water fishing. However, towards the south end of the floating town, Lobster Traps and Fishing Nets may be used , as well as Sea Serpents fished up, a somewhat odd contravention to the usual definition of deep water fishing.