Boats allow players to travel across the seas of Britannia. They are subject to decay in the same way that houses are, and will sink if left alone too long (about 5 days). The small boats are much smaller and cheaper than Galleons but may not be armed with cannons.

Small boats may be purchased from players or NPC Shipwrights in most towns, usually ones near oceans or large bodies of water. The Tokuno Ships and Gargoyle Ships can be purchased in deed form only from the Shipwrights at the Sea Market. The Orc Ship is obtained as a reward from the Professional Bountyhunter Quest. NPC Shipwrights will always sell boats in deed form, a ship deed indicating the boat size and type(see below).

Players may sell boats as either deeds or, much more commonly, a Ship Model, which appears as a miniature ship. Never purchase a boat in any other format including "handing you the keys" at dockside in exchange for payment as it's likely a player perpetrating a scam.

As a quick side-note, there is also a scam involving players selling a miniature ship called A Ship Model which is actually just a ship named Model which has been dry-docked into the miniature ship. The true rare item known as a Ship Model does exist but be sure to denote the lack of a preceding A in the item name.

There are eleven types of boats.

Classic ships have been around since initial release. They have the same speed and storage capacity in their holds. The only real difference is in size, with the mediums being two tiles longer than the smalls and the larges two tiles longer than that. The size difference allows for a bit easier maneuverability of the smaller ships through tight areas. A dragon's head carving adorns the prow of the various sizes of dragon ships while the regular ships lack it, merely a decor preference.

The larger boats are introduced with the Ultima Online: High Seas booster pack. They have different speeds, hold sizes, cannon capacities and durabilities.

Rowboat is the only other type of vessel deployable when you already have a boat or galleon deployed. It moves slowly, thus only being useful for short range travel.

To use a command just speak it so the tiller man can hear it.

Some commands may be spoken in combination together, such as forward left or back right and capitalization is not necessary as the tiller man never finished school and couldn't care less.

Mouse control of the boats is introduced with the Ultima Online: High Seas booster pack. To control the boat using the mouse, double-click on the ship's wheel and you enter the mouse driving mode with the system message:

You are now piloting this vessel.

To exit the mouse driving mode, double-click on yourself. The ship’s owner can also seize the ship's control from another passenger at any time.

A rowboat can only be boarded by the owner, players partied with the owner, or in the same guild as owner. However, if someone hops in a reverse gate to a rowboat they will be allowed to board it.

Small boats are secured using the boat key, which each player is given a pair of every time a boat is placed in the water. One key goes into the player's pack while the other is placed automatically in their bankbox. When a boat first enters the water, the plank, or gangway, on each side of the boat is locked. Players use their boat key on the plank to unlock and lock the it, allowing for ingress and egress. When the plank is unlocked, it can be extended by double-clicking on it, allowing anyone to enter or exit the boat, done by double-clicking the plank or simply walking on or off it if it is close enough to land, such as docks.

When both planks are locked, no one may come board the boat via the planks. The exception is if someone has one of the boat keys, which then allows them to use Recall or Sacred Journey upon the key as if it were a marked rune.

Keeping the boat secure is vitally important when sailing in pirate-infested waters to avoid being boarded by either murderers or thieves.

To avoid people being trapped on boats against their will, a plank may be double-clicked to temporarily extend it for exiting purposes only, even if it is locked.

Keeping the boat key secure is also important as anyone with one of the keys can command the tiller man as well as dry-dock the boat and keep it, even if they were not originally the person who bought or placed the boat in the water. Boat keys in player backpacks can be a juicy target of thieves.

Much like houses, players can be granted access to the Galleons if it is set to private. To do this, left click once on the player you want to grant access to and choose Grant Access from the context menu. Note that once a player has been granted access to your boat, they will be able to drive it using the wheel. However, they will not be able to give commands to the Pilot. Also, once someone is on mouse-driving mode, the Pilot will not function until the mode is disabled. To enter a galleon, you should double-click on one of the mooring lines located on each side of the boat to board.

4) In this example we chose Captain 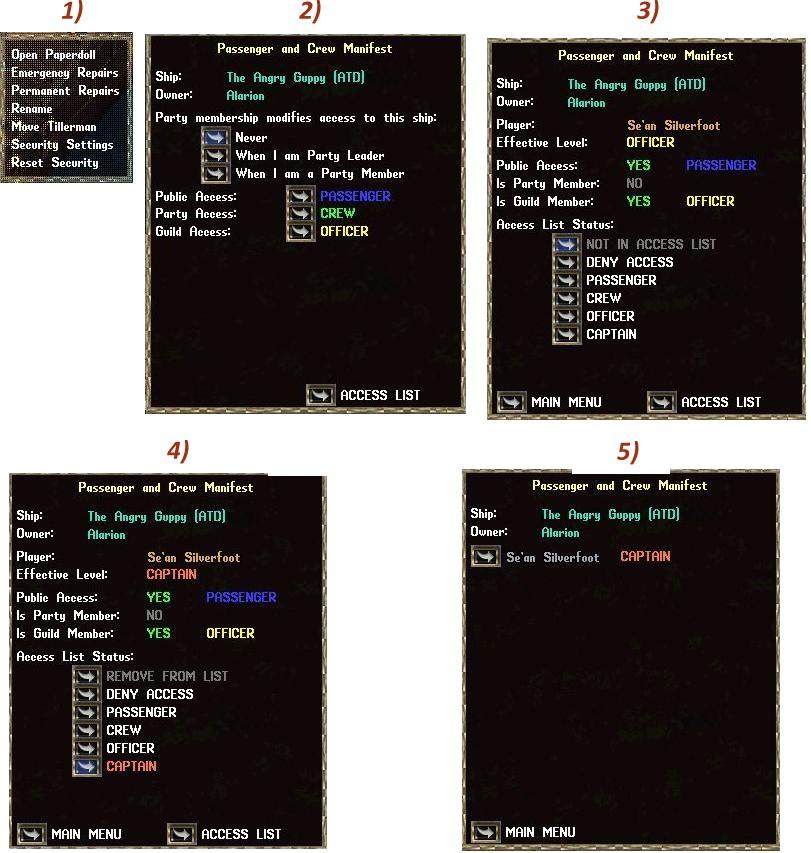 Each type of boat has a hold that players can store items in, up to 400 stones or 125 items, whichever comes first. The hold cannot be locked, so anyone able to get on-board the boat can access the hold. The hold is located at the front of the boat inside the hatch. When a boat sinks due to decay, any items stored in the hold will simply float motionless in a pile on top of the water where the boat sank free to be salvaged by any passers-by.

Since boats are an expensive investment, one of their great features is they may be stored safely when not in use. The hold must be empty, no one aboard, the decks clear of any debris or corpses, both planks locked and the anchor dropped before a boat may be dry-docked. Once those conditions are met, a player holding the boat key simply double-clicks the tiller man to dry-dock the boat, at which point it disappears from the water and goes into the player's pack as a miniature ship with the name of the boat (or description if the boat was unnamed). Miniature ship models are blessed and cannot be stolen.

Previously, players would dry-dock their ship with a Harbormaster and receive a Ship Claim Ticket. They could then hand the ticket back to the Harbormaster to reclaim their vessel. When the dry-docking process was instituted, Ship Claim Tickets became an unforseen yet valuable collectible rare item.

Small boats are unarmed, but players experienced in the ways of the sea and with a good knowledge of sailing can easily outclass playes who are inexperienced in sailing. Boats can be used to box in, block, bottleneck and stop other boats. Much of this can be done with skillful maneuvering using combinations of sailing commands as well as having an intimate knowledge of the nearby coastlines, islands and even server lines. Some spells have unanticipated effects at sea, especially on moving targets.

Seaborne murderers in Felucca, or pirates, favor Poison Field and Fire Field spells against their prey as there is little room to run around on the deck of a boat. Additionally, the seas of Sosaria can be desolate of other people making finding help or even a resurrection difficult and time-consuming. Absent-mindedly leaving a plank unlocked and being boarded by surprise is often a sealed fate at the hands of pirates. Some pirates will even set traps of piles of gold or items on drifting boats, hoping to lure a passing player closer out of curiosity. If one is not itching for a usually one-sided fight, the best advice is steer clear of enclosed coastlines or opportunities that seem too good to be true. Many a miner at sea in Felucca with hopes of easy double ore stacked high on the deck, or adventurers seeking a treasure chest on that facet provide a fine day's pickings for pirates.

Galleons can be armed with Cannons to damage other ships, creatures or players. They also take damage but can be repaired.

Galleons have durability and can be damaged by Merchant Ships, Pirate Ships or other player ships in Felucca. Permanent Repairs can only be performed when the ship is near land or at the Sea Market. Emergency Repairs can be performed temporarily to remove the scuttled status and may be done anywhere. There are a total of five damage conditions:

Galleons decay similar to houses. In order to refresh a ship one needs to double-click the mooring lines. This refreshes the ship even when out at sea. If you neglect to refresh your ship it will vanish after 13 days, going through the following decay phases:

Recovery Option through a Lighthouse

Publish 85 introduced a new House Addon: Lighthouse. They recover any ship that are linked to the lighthouse. Rowboats are not being recovered.

Ship Tracking was introduced with the Ultima Online: High Seas booster pack. The command Start Tracking will activate the tracking mode where you will see arrows pointing to up to five nearby ships. Ship tracking tracks all boats whether they're friend and foe. To stop tracking say the command Stop Tracking. Note that you must be within 200 tiles of another ship for ship tracking to work. Also, ship tracking does not seem to work on all ships, just Galleons. Additionally, there is currently a bug where ship tracking arrows will point to ship models locked down in player homes.

Aside from their primary purpose as a means to travel upon the seas, boats can be employed in many other useful roles.

Formerly, boats were heavily used in the 8x8 method of skill gain. Changes to game mechanics and the way skills were gained removed this method, thus leaving the seas desolate to some degree.