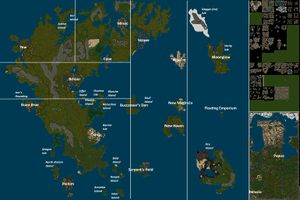 A server line is boundary between two sub-servers.

Each shard is composed of several sub-servers, each of which hosts a portion of the world. Where one portion of the world ends and another begins is demarcated by a server line. For example, one sub-server handles the entire Lost Lands area while another hosts the city of Britain and the lands to the west of it.

Server lines are more or less invisible but crossing over them can be noticed in a variety of way. While at sea, crossing over a server line can cause the tillerman to say "Arr! Turbulent Waters!" and any open containers on your screen will close. Other noticeable effects can include your stats suddenly dropping but then just as quickly going back up.

The exact number of sub-servers per shard is roughly a dozen. Anyone know exactly how many now?

Escorts may sometimes, although rarely now, lose sight of the player leading them to their destination when crossing a server line.

In the past, there was a somewhat infamous server line east of Britain along the road. A player on one side of the server line would appear flagged criminal, or grey, to players on the other side. This would often lead to one character attacking the other in the belief they were freely attacking a criminal when in fact they were putting themselves in a criminal posture, leaving themselves open to attack.

Many dupes and bugs used to be associated with exploiting server lines but these oversights are usually quickly discovered and fixed with harsh punishments in store for players taking advantage of them.