Mysterious fragments appear randomly in a Treasure Chest found via a Treasure Map starting with Publish 105 in June 2019.

The fragments can be found in eight colors that correspond to each of the Virtues. They are not stackable and weigh one stone each.

With Publish 107 (aka Jolly Roger), 8 randomly colored fragments spawn in Treasure Chests as dictated by the RNG. Rough calculations after hundreds of chests estimate the spawn rate in a chest to be approximately 27%. This turned up spawn rate and quantity by the development team was to appease those who felt there wasn't enough time to gather fragments with all of the other activities happening (holiday season).

Double-clicking a fragment results in the following: 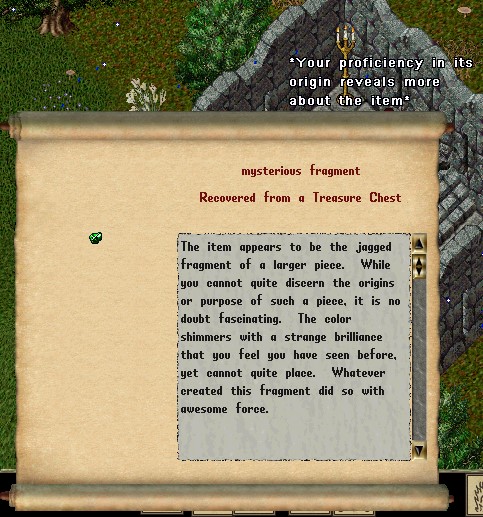 If placed on a Shrine whose color corresponds to the Virtue of the fragment's color, a message will appear stating that you feel a surge of power and the fragment will sink into the ground. 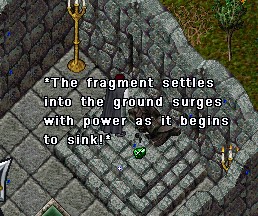 With Publish 107 (aka Jolly Roger), using multiple fragments at their corresponding shrine will cause groups of powerful mobs to appear. This is what many are calling Shrine Battles and is not something a soloist would want to try alone.

Contemplation of the use of these Mysterious Fragments grows with the destruction of the Ankhs at each Shrine.