These spawn randomly as loot on the corpses of paragon creatures in Ilshenar. Paragon treasure chests come in a variety of hues. These chests are locked, trapped, and always contain a Treasure Map of one level higher than that monster normally would carry.

The value of some of the contents of such chests increases with the level of the map, (i.e., Hoard treasure maps yield more gems and gold than Cache treasure maps).

In terms of those recovered from the sea from Waterstained SOS with the Fishing skill, ancient SOS scrolls yield white treasure chests, which will contain a Fabled Fishing Net, in addition to gold and other swag, including the chest itself which can be kept as a container.

Lockpicks can only gain skill to 95 on such chests, after which they must practice on dungeon chests.

Usually these chests are empty or contain items of little or no value, the exception being semi-rares that appear in certain town chests. After opened, you must steal any desired contents. If not done correctly, such stealing can result in getting Guard Wacked. 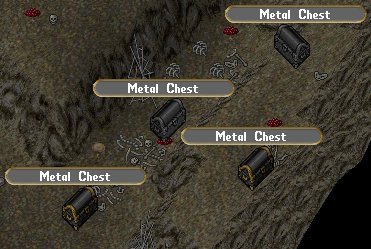 As with NPC camp chests, there are two levels of dungeon chests: a first class of barrels, small crates, and kegs; a second class of wooden chests, metal chests, and large crates. Lockpicks must train on dungeon chests in order to gain lockpicking skill above 95. Dungeon spawn chests have a life span of 9 or 10 minutes. When such a chest disappears, it is replaced by a fresh one a minute or so later in the same general area.

Container chests can be crafted by carpenters with a skill of 73.6 and above. They require 20 boards or logs to create. Like any other container, they can be locked down in a house. Such containers hold up to 125 objects.