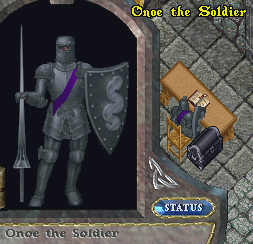 Onoe the Solider was an NPC who collected various items in exchange for tickets which could be turned in for points as part of Spring Cleaning 2008.

He could be found in Britain inside the south guard tower at the entrance to Castle Britannia, except for the shard of Siege Perilous where he was located in the guard tower just southwest of the West Britain Bank.

For having such an awesome name, Onoe was lucky and was tasked with guarding the chest next to him which was where tickets were turned in and reward items chosen and so he almost always had visitors to chat with. This contrasts sharply with poor Calaid, who got stuck in the north guard tower collecting weeks old, reeking snake food and dead reptile skins and almost never saw anyone. Quite simply, he is jealous of Onoe, but hasn't told him he is dating his sister yet.