Ritual is a quest-chain given out by Prugyilonus the Advisor to the Queen who can be found inside the Royal Palace. The quest became active with Publish 71 and it is part of the Echoes of the Past event cycle. It can be completed more than once per character.

Ritual: Scales of a Dream Serpent

Prugyilonus at the Royal Palace

Greetings, adventurer. Our queen has need of your services again, should you be willing to come to her aid.

As you may know, her Majesty has spent the past thousand years diligently researching ways in which she could defeat the Defiler. I have personally assisted her in this effort and we have discovered a ritual which will magnify the cleansing magic that she originally used against him, potentially breaking the barrier that protects the Defiler’s body from harm.

The ritual is ancient, dangerous, and requires many obscure components that are not easy to obtain. Her Majesty has been successful in acquiring all but five of them over the years but, now, time is running out and she has asked me to task you with their acquisition. I have been provided with a list of the five remaining components and would like you to obtain them.

The first component that I require is a handful of scales from a Dream Serpent.

Dream Serpents are mischievous but benevolent creatures that live off of magical energy. They are extremely rare and hard to catch, preferring to live in the realm of dreams rather than the physical realm. However, there is one location within the kingdom that you may find one.

Journey once again to the Southwestern Flight Tower. On your way to the Athenaeum, you may have noticed a clearing surrounded by four hillocks. This location is an intersection of ley lines which run throughout Ter Mur. Ley lines are energized, concentrated strands of magical energy and thus they are irresistible to the creatures. If my calculations are correct, you should find a serpent and be able to interact with the creature. Heed my warning, adventurer: you should not seek to harm the beast. Offensive tactics must be avoided at all costs, as these magical beings help keep the very energy of Ter Mur harnessed and in balance. Speak with the creature and ask for its aid, but do not harm it. When you have acquired the scales, return to me and I shall reward you and guide you towards the second component.

Bexil the Dream Serpent can be found a little north to the teleport to the Athenaeum Isle, at 167 N, 46 W, in Ter Mur. It will give you the quest Catch Me If You Can!:

Ritual: Catch Me If You Can!

Oh, have you come to see me?

This is wonderful! I haven’t spoken to a mortal in so long. It can get pretty droll here in the realm of dreams, and I have no one to play with! There aren’t many of us left.

What’s that? You want something?

My scales! Ha ha! You mortals are so silly, always after something or other.

Well, I'll happily give you some scales if you agree to play a game with me! I love games, don’t you?

The game is simple: if you can hit me 6 times, then you win! Take this stone and step into the circle here. Then, use the stone and it will take you to my favorite place to play!

So, shall we play? Excellent! Be sure to put away your pets before you teleport with me!

After accepting the quest, a

Dream Serpent Charm will be placed in your backpack with a 86400 seconds (24 hours) timer. Clicking on the charm will teleport you to a remote location. You need to hit Bexil six times in about 30 seconds while it keeps teleporting itself around the area.

Boo, I don’t like to lose! But wasn’t that fun?

Here are some of my scales; give them to the Gargoyle Queen with my blessing and tell her she needs to come play a game with me sometime!

Dream Serpent Scales, mark it as a quest item an return to Prugyilonus:

You have the scales? Excellent!

We are now one step closer to completing the list of components for the ritual, my friend. With your assistance, I believe we will be able to acquire all of them just in time.

Now, on to the next component.

Ritual: Tears of a Soulbinder

I fear I must now send you to convene with a creature that may not prove as willing to help as the ones you have encountered previously, my friend. I require the crystallized tear of a Soulbinder, a malevolent creature that prefers to roam the desolate edges of Ter Mur where the Void has consumed much of the area.

Spawned from the depths of the Abyss, the Soulbinder is a vile and disgusting creature that prefers to consume its victims alive, devouring their souls during its digestion. It is the spirit of its prey that nourishes the beast, and this hunger is the only thing the beast knows. I know not how you will cause one of these monsters to shed a tear, but I believe you are resourceful enough to find a way.

Journey to the northeast, and follow the twisting strips of land surrounded by the Void; you should be able to locate a path to the lair of this foul thing. I wish I could provide you with guidance regarding approaching the beast, but I have been unable to discern anything beyond its location. Be on your guard, adventurer, and be prepared to do battle should the beast prove hostile.

Grubbix the Soulbinder can be found at north east Ter Mur, at 133 S, 15 W. It will give you the quest Filthy Lifestealers!:

Ah, what do we have here?

Bah! I was so hoping you would be something other than a human, gargoyle, or elf. Do you know how many of them I have eaten? Your souls have filled me but, now, they are no longer appealing. You are in luck that I have recently eaten, however, or else I would have devoured you anyway.

You want something, yes? I can smell the desire for something on your soul. Desire used to be such a lovely dessert for me but now it is bland and droll.

My tears, eh? Ha! Such an odd request. But you have my interest piqued.

I’ll tell you what; do something for me and I will give you a bottle of tears.

In the northwest, walking the lava shores, is a creature that has vexed me for centuries. An old foe, the Lifestealer eats the hearts of its victims, consuming their essence in a similar fashion to how I consume their souls. Many times have I lost a victim to these inane creatures, and many times have I attempted to exact my vengeance. Unfortunately, due to my corpulent nature, I am not as fast as they are and have failed in my desire to kill them. Wouldn’t it be poetic? A Soulbinder consuming a Lifestealer!

Go to the lava shores in the northwest, mortal, and kill the lifestealers you find there. When you have thinned them out, return to me and I will give you what you seek.

Lifestealers can be found near the lava shore in north west Ter Mur. When you have slayed all 10 creatures, return to Grubbix the Soulbinder:

I can smell their deaths upon you, mortal. Each Lifestealer you killed let loose all of the souls that they had taken, and I was able to draw them here with my magic. I am so full, now! I think this will hold me over for quite some time.

Here, take what you came for. While you were gone, the thought of those Lifestealers dying was enough to make me laugh so hard I cried. I filled this bottle for you.

Off with you, now!

Soulbinder's Tears, mark it as a quest item an return to Prugyilonus:

You continue to amaze me, my friend. I will admit I was concerned that the Soulbinder would prove to be too much of a challenge and, yet, here you are.

Are you ready to go after the next component? 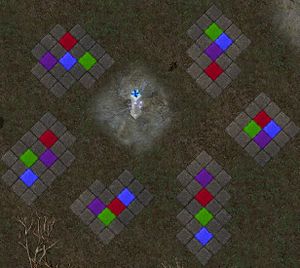 Now, you must traverse the northern desert. On the far edge, you will find a teleporter similar to that which you took to the Athenaeum Isle. This will take you to a barren, small, and twisted piece of land that was long ago drained by the Void.

The next component will be found there: a pristine crystal lotus. Long ago, what is now desert was a beautiful field of these flowers. Sadly, the Defiler's magic drained the land of life and energy, causing the land to become the wasteland it is today. However, one bloom remains, and it is that bloom you must acquire for me.

In my research, I discovered that Queen Zhah’s predecessor, King Trajalem, had the only surviving bloom placed within a protective barrier on the island I am directing you to. No one knows exactly why he did so, but I have journeyed there myself and seen it with my own eyes. Unfortunately, I was not able to discern how to break the barrier protecting the lotus.

The lotus stands on a pedestal surrounded by a configuration of magical tiles. I feel that these tiles are the key to breaking the barrier and obtaining the bloom. However, their secret eluded me. What I was able to discover through research is that you must speak the words ‘I seek the lotus’ to activate the tiles. Additionally, if you do manage to satisfy the secret of the tiles, you must state ‘Give me the lotus.’

Journey to the area, my friend, and please obtain the lotus. If anyone can do it, I have faith that it is you.

Be well, and I look forward to your return.

The teleporter to the magical tiles is located at 115 S, 19 W. You will come to an opening with six areas on the ground having four colored tiles each. Saying I seek the lotus will activate the puzzle. Each time, one of the 24 tiles will be colored to white in sequence, and much like a memory game, you need to enter the correct pattern before the time runs out. When you complete enough correct patterns, you will see a system message saying You may now retrieve a Pristine Crystal Lotus. In order to retrieve the lotus, say Give me the lotusand the

Pristine Crystal Lotus will appear in your backpack. Mark the crystal as a quest item and return to Prugyilonus:

Once again, you astound me with your perseverance and triumph! I cannot thank you enough. You are truly proving yourself a loyal friend.

Now, only one component remains.