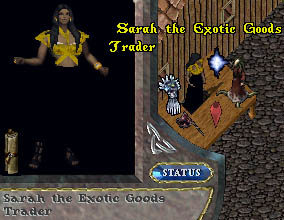 Sarah the Exotic Goods Trader was found in Moonglow standing with her wares just outside the Second Defense Armory armor shop to the west of the bank as of Publish 63. She traded red crystallized essences or Halloween 2009 costumes in exchange for new costume types. Sarah packed her bags and disappeared with Publish 64.0.1 on February 12, 2010. Previous to that, her departure had been forewarned by messages from the dev team to be no sooner than February 2, 2010.

Sarah would greet passers-by with:

"Say 'browse', 'turn in' or approach me to trade your costumes or see mine!"

She appeared to use a system similar to the one used by Ihara Soko the Imperial Minister of Trade from the Treasures of Tokuno events to detect trade-in items in your pack.

Saying "browse" to Sarah brought up a multi-page menu of 26 costumes, each of which could be traded for points from turning in red crystallized essences or the original Halloween 2009 costumes. The number of points for both turn-ins and exchanges varied. See below for the exchange point values and costs.