Solstice of the White Hart 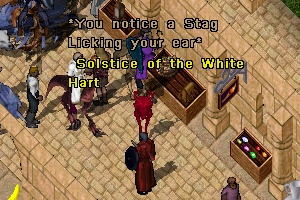 Solstice of the White Hart was an invulnerable holiday reindeer that randomly appeared and disappeared in Luna and Britain during the 2009 Holiday season on the Chesapeake Shard. Its color varied - originally it was white, but it later appeared in both red and green.

When it appeared, Solstice would run around town, licking ears and sometimes flying up to high ledges, randomly dropping various different Holiday 2009 items that were not available as choices from the Holiday Gift Ticket. Ambitious players would chase the reindeer anywhere it went, hoping to pick up any holiday goodies that it might drop.

Further investigation has shown that there were similar holiday reindeer frolicking and dropping items on other shards - each shard's items are unique to that particular shard. The items listed below are from Chesapeake.

These items were re-hued and renamed items - each had (Happy Holidays 2009) at the end of their name.

Several other items were dropped by the stag that did not have (Happy Holidays 2009) in their names - some re-hued and renamed, others GM tagged with "Crafted by Solstice of the White Hart".