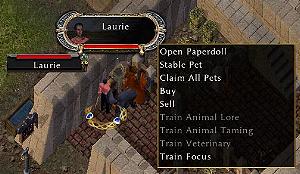 Stables are locations in towns and cities where a character may "store" a mount, other pet, or Golem while unneeded.

Creatures may be placed in the stables by saying the word "stable" near a stable master. You may then target the pet you wish to store. Pack animals may not be stabled when loaded, and dead bonded creatures must first be resurrected.

Using the "claim" term allows you to retrieve as many pets as your control slots allow, though it is usually more practical to specify exactly which pet you wish to retrieve (for example, "claim rover").

You may also say "claim list" (or request a pet you do not own, eg "claim asdf") to be shown a list of pets you currently have in the stable, from which you may select the desired pet.

Note that pets who are guarding you will still count as such after you've placed them in the stable.

When retrieving pets, remember that the first that came under your control is your "active" pet. This will be targeted by creatures you set your pets on.

For example, if you first retrieve a Nightmare and then a Rune Beetle from the stables, using the "all kill" command and then targeting a monster will result in it concentrating it's attacks on the (weaker) mare. If the beetle was retrieved first, it would receive the brunt of the attack instead. Check your pet's health and resistance values and claim them accordingly.

Each pet requires one stable slot, regardless of how many control slots they use. A typical (non-tamer) character has two available stable slots. Tamers, however, have a increased amount of stable slots based upon their combined taming abilities. The sum of the character's skills in Animal Taming, Veterinary, and Animal Lore determines the amount of additional stable slots according the following table:

Beyond that, 2 additional stabling slots are granted characters on an account upgraded with the Stygian Abyss Expansion.

The maximum amount of stable slots any one character can have is 21:
Five slots for having 240.0+ taming skills, nine bonus slots for the three taming skills at levels 100.0, 110.0, and 120.0 plus 2 bonus slots for being SA upgraded.
plus 2 additional slots are available through Time of Legends.
plus 1 additonal slot per tier using Taming mastery.


Stable slots are based on current skill level including jewelry. A character with 99.0 skill in one of the three skills can get an additional bonus slot by wearing a piece of +1.0 skill jewelry in that skill. When the jewelery is removed, the creature will remain in the stable.

You can check your number of filled/total stabling slots by the command "stablecount".

Use of the stable is a key factor in "bonding" a pet to an owner.