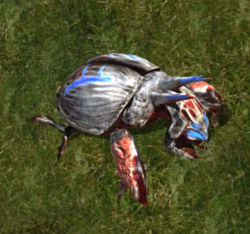 A tough, hard shelled poisonous beetle. The beetle kills by poisoning its foe,and then bleeding them to death. If one can be tamed, they make a very strong pet.

Due to it's very high dexterity, this pet can move at lightning speed - often jumping off the screen to attack before you register an enemy presence.

Aside from it's well known bleed and poison attacks (which are quite dangerous in their own right), the Rune Beetle can also inflict an Armor Corruption on it's target (causing their resistance levels to drop dangerously low). Although it can take less damage then a Cu Sidhe, it can deal far more in a shorter period of time. Especially true in that the three slots required to control it allow for a backup pet.