Halloween 2010 brought back some popular Halloween-related activities from previous years as well as new additions and special items to celebrate the holiday. It went live with Publish 68.3 and scheduled to end November 15, 2010.

There are 4 new treats as well as the old ones. These can be obtained by simply walking up to an Npc, saying "Trick or Treat" and then targeting them.

If a character has Grandmaster (100.0 skill) Begging there is a small chance to receive a special treat from previous years or one of the four new rare treats.

The new trick that temporarily changes the hue of the character's body and equipped items. Note that Scissors can be used on these clothing to obtain

Cloth having the same hue.

A mysterious merchant, Nosferatu the Counter, has appeared near the Umbra moongate selling

Greetings friend, please give a donation to the Help a Hellhound Society. 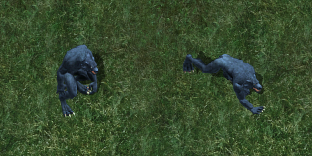 Little is known of his motive, but know that giving treats to hellhounds this time of year is not for the faint of heart! Double clicking the treat and targeting a Hell Hound will transform it to an Ancient Hellhound.

Bloody Sashes are rewarded to those who can kill these beasts. Equipping a Bloody Sash will transform your appearence to resemble a werewolf.

pumpkins this season. Pumpkins could be picked up from most any farm land. Some of them may be double-clicked and thrown as a fire bomb. Additionally, the named pumpkins may be used with the Cooking skill to prepare food items requiring pumpkin. The pumpkins can weigh anywhere from 3-25 stones and very rarely a Jack O' Lantern will spawn.

Menacing and Leering, Lit and Unlit

Very rarely, a named pumpkin spawned as a large Jack O' Lantern with a carved face. They spawned in a variety of designs and can be locked down in a player's home and left lit or unlit.