Halloween 2013 brought back some popular Halloween-related activities from previous years as well as the pumpkin patch of Halloween 2011 and 2012. It went live on October 1st and is scheduled to end in early November.

The Zombie Skeletons of the recently deceased players are seen in graveyards across Britannia and the Lost Lands. There is a chance for them to drop a

bone container named after the player (eg. Cogniac's Bones) in one of the the random hues. 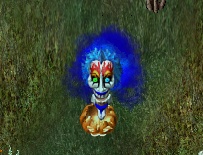