Lenley can be found in the northern section of Sanctuary. He is hidden, but his location can be determined in the Enhanced Client by looking for his green, quest giver marker on the radar screen. When you approach, Lenley will come out of hiding. When he does, he is a normal looking ratman that flags blue. Other creatures will immediately attack him. 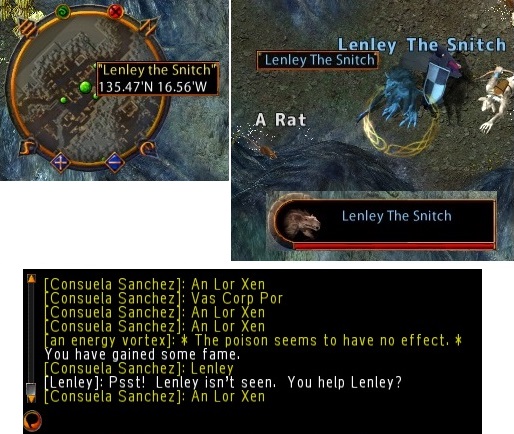 Double clicking on him will open a dialogue for the quest Freedom!, wherein he offers to give you his "favorite sparkly" if you escort him to the entrance of Sanctuary.

If you accept the quest and Lenley doesn't make it, he often respawns in the same location. His spawn timer is undetermined. If you approach the area where he is hiding (where his quest giver marker is on the radar), you can often hear him making noises (standard ratman idle sounds). If you get close to him, he will say "Psst! Lenley isn't seen. You help Lenley?", but may not reveal himself. In Felucca you can walk over him and get the "Being perfected rested you shove something out of the way" message, but he won't reveal himself. Lenley is constantly moving around his spawn area while hidden. Casting reveal on his exact tile location with a 120 Mage/120 Eval character will reveal him (This may only work in Felucca), but you must cast on his exact tile, and since he is stealthing around while hidden, it is difficult to do. Clearly he is well trained in both hiding and stealth. When Lenley's spawn timer completes, he will once again choose to reveal himself if a character approaches his hiding location.

Lenley's reward is supposedly his "Favorite Sparkly". This may be a reference to the "Stolen Ring" required for the final quest, Token of Love in the Quest Chain: Ratmen. The NPC who gives the Token of Love quest, Danoel the Metal Weaver, makes reference to the ring being stolen by ratmen and says it's "sparkle must have caught their greedy eyes". However, Lenley's reward turns out to be A Bag of Trinkets.

There is speculation amongst the UO community that since Lenley doesn't give the correct reward, the Token of Love quest is broken. Or perhaps the stolen ring is a rare drop reward and no one has bothered to complete Freedom! enough times to acquire the stolen ring.