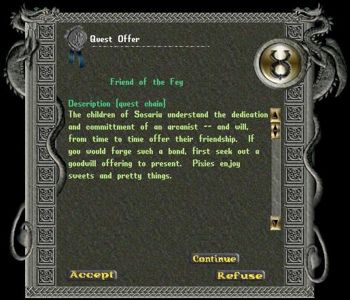 Friend of the Fey Quest Chain.
Click to enlarge.

A Chain Quest is a series of individual quests, each of which must be completed in order to successfully complete the entire chain. Developers have the ability to create quest chains that are either repeatable or non-repeatable (e.g., the Know Thy Humility (i.e., Humility Cloak) chain is non-repeatable, while the Marauders chain is).

It should be noted that several entries on the following list are not the official names for the chain.

To begin Spellweaving training, a character first must complete one of two chains, which are respectively located in either Heartwood and Sanctuary:

Upon completion of either, a character will receive: a spellweaving spellbook, an Arcane Circle scroll, and a Gift of Renewal scroll.

In March, April, and June of 2007, there were 3 quests associated with the attacks on the Shrines of Love by the minions of Astaroth, the Shadowlord of Hate. By completing all 3 quests, players could help to fuel the Candle of Love, beat back the attacks, and gain a sweet reward.

† The third and final part of the Broken Sanctuary Chain Quest, namely the Token of Love quest, appears to be broken, as the object of the quest does not spawn. Allegedly, no player so far has been able to complete the quest.