Seeds are small items that can be used for growing Plants via Gardening. They each weigh one stone and can be stacked.

There are two factors that determine a plant: variety and color. Varieties are then grouped into roughly 4 classes: classical, bonsai, peculiar and fragrant and oddities.

Seeds with particular color and varieties are initially gained as loot from certain creatures, but most varieties and colors are grown by breeding multiple generations of plants.

Certain older or bugged seeds that do not stack can be made stackable with use of the Gardener's Toolbox.

Currently tribarrel cacti seeds are replaced by random seeds, which now include all classical varieties as well as (flowery) cactus oddity and vanilla oddity. However, two thirds of seed drops are still either campion flowers or ferns.

Such seeds will be named according to their color (eg "Red Seed"). There are several ways to obtain descriptive seeds (eg "Red Tribarrel Cactus Seed"):

Breeding different combinations of these seeds together can produce more colors and plant varieties. Any plant that provides seeds can produce a total of eight over it's lifetime.

The initial starting seeds are dropped by:

There are 17 types of classical breedable varieties:

Often this table is presented in L-shaped manner: 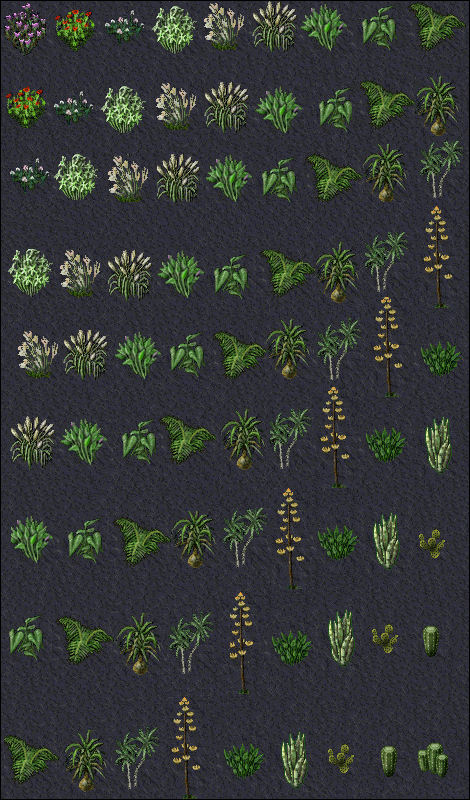 Green Thorns, which produce various random effects, are produced by Bright Green plants of these types:

Red Leaves, which lock the contents of books, are produced by Bright Red plants of these types:

Orange Petals, which provide high levels of poison resistance, are produced by Bright Orange plants of these types:

Cocoa Pulp, which is used as a Cooking ingredient, is produced by Cocoa Trees.

Poppies Dust, which is used to ID unnamed seeds, is produced by the "peculiar" style of poppies.

Mutants are grown from specially colored seeds, but cannot be bred and do not produce more. There are 2 ways of obtaining mutant seeds.

1st Way. They are typically obtained by completing the Naturalist Quest.

2nd Way. Any plant that can produce seeds (aside from the Cocoa Tree) also has a chance of producing black or white mutants instead of the color they normally would. Such seeds are very rare.

With the advent of Ultima Online: Samurai Empire, certain creatures in the Tokuno Islands have a chance of dropping special Bonsai seeds. The seed name corresponds to the names listed below. For example, an uncommon bonsai comes from an uncommon seed. There are eight varieties:

All forms are dropped by:

Peculiar seeds began appearing with Publish 55 and can grow 17 new plant varieties (one of which comes in two facings, for a total of 18). These plants cannot be cross-pollinated and with the exception of Vanilla (began appearing with Publish 76, it can produce seeds and can also produce Vanilla as a resource), do not produce new seeds nor resources. Instead, they are only dropped by certain monsters.

The seeds are divided into five groups based on the monsters that drop their seeds. For example, if you want to get a twisted Cypress Tree you must kill monsters from the second group. As the seeds are unlabeled either have to wait until the seed reaches the 7th stage of growth or use the resource poppies dust to identify the seed type. Assuming you harvested from the correct monster, you have a 20% change of receiving the seed in Group 1 you are after and a 25% chance for the seeds in all Groups 2 to 4.

Fragrants seeds began appearing with Publish 55 and are used to grow the Cocoa Tree, which in turn can not be cross-pollinated.

Whenever a creature would drop a Peculiar seed, there is a chance a Fragrant seed will be dropped instead. They are hence collected from the same creatures but at a lower drop rate. Unlike peculiar plants, they do grow further Cocoa Tree Seeds.

The Chocolatiering branch of the Cooking skill was introduced with Publish 50 on St. Valentine's Day 2008 but cocoa pulp and cocoa trees did not appear until Publish 55, nearly 6 months later.

Some plants are available as decorative items outside of the Gardening system.

Available during the Spring Cleaning 2008 event:

Plants given during Holidays:

Plants have undergone name changes and as such original plants could be considered rare. Original plants have the name Decorative Plant and do not list the color or type of plant. The second generation of naming included the plant color. The current and last naming system now includes color and type.