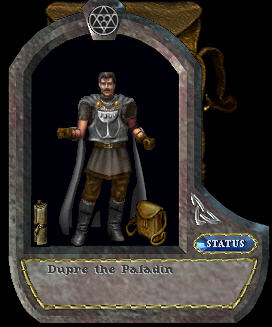 Dupre is an important NPC in the history of Ultima Online. He was a Paladin of the City of Trinsic and a close friend and ally of Lord British. He is usually portrayed in official fiction as leading the True Britannians Faction in Felucca, and was assumed to be serving on the Royal Council that ruled Trammel in Lord British's stead before the reigns of Casca and Dawn.

He led the defenses when that city was attacked by the Undead Army of Minax and lead the expedition to repair the Bell of Courage, both immediately prior to the creation of Trammel.

He sought an alliance with the Meer when he fought alongside Dawn against the Juka.

Though he was referred to as being in the Royal Council, Dupre appears to have not been around for the Royal Council Massacre, and it was implied in the Lord Blackthorn's Revenge comic book that his primary job was maintaining a certain (off-stage) leadership role over the True Britannians Faction. Indeed at the time of the Massacre (part of the epic Warriors of Destiny storyline), he had not been seen in-game for many years.

Dupre made a return to the stage as part of the The Awakening story arc. He took a leading role in leading the Royal Britannian Guard on many shards, and focused on the threat of Exodus, a threat which had been growing while Britannia was distracted by social, political, and economic problems. Dupre's long absence from the stage caused a certain amount of resentment among the player characters of some, but not all, Shards.

This section contains information about Dupre's history in UO and in Ultima Prime.

Dupre, knighted by Lord British during the Avatar's two-hundred year absence, was one of the most valorous and honorable knights of the realm. First entering our realm at the end of the Second Age of Darkness, Dupre has since been a defender of the land and a fixture at local drinking establishments.

During the time of Exodus, Dupre made his home in Britain, venturing outside its steadfast walls often to do battle the vile minions of evil that plagued the land.

After the fall of Exodus, when Lord British created the Eight Virtues and founded the Eight Cities of Virtue, Dupre quickly adopted the way of the honorable Paladin. He made his abode in Trinsic, until the day when the Hero, striving to become the Avatar, arrived in Trinsic, and enlisted Dupre's aid in his quest. Dupre traveled with the Hero on his quest, until they parted upon the Hero entering the chamber of the Codex.

Dupre continued to live in Trinsic until the arrival of the Shadowlords, when he was driven into hiding at Bordermarch Keep. He aided the other Companions in summoning the Avatar, and when he arrived, Dupre gladly joined his friend in his quest to defeat the Shadowlords and rescue Lord British.

Until the Avatar's next visit to Britannia, Dupre spent most of his time in Serpent's Hold and Trinsic. But when Nystul sensed that the Avatar was in peril, Dupre, Shamino, and Iolo rescued their friend from the Gargoyles. Dupre helped the Avatar save Britannia and the Gargoyles during this Age of the False Prophet.

During the Avatar's long absence, Dupre was knighted by Lord British, and became Sir Dupre. He also went on a tour of all the drinking establishments of Britannia, while doing a survey for Brommers. Dupre was in Jhelom when he joined the Avatar once again, to stop the Fellowship and the Guardian, and save Britannia.

In his final adventure, the noble Sir Dupre ventured to the Serpent Isle, with Iolo, Shamino, and the Avatar, in a quest to stop the fiend Batlin and find Iolo's wife, Gwenno. When Batlin was killed, and the Banes of Chaos released, Dupre was possessed by the Wantonness Bane, which destroyed the town of Monitor, and most of its inhabitants. When he was finally exorcised of the Bane by the Avatar, Dupre was heavy with the guilt of all the deaths that he had caused while under the Bane's control. But when the ashes of a hero were needed to reunite the Chaos Serpent, Sir Dupre gave his life, so that the Avatar could complete his quest, and Dupre was made one with the Serpent of Chaos. This was the end of a truly noble Knight of Britannia.