Before you can create a new character, you must pick the world, or shard in which you will live. Of course you can have characters on multiple shards, but for the time being, you should find your home shard.

In general, you will want to pick a shard that is in your geographic region. If you live in the UK, you won't want a Japanese shard. Likewise, if you live in San Diego, Atlantic is probably not the best shard for you.

Beware of Siege Perilous and Mugen, as they use the Siege Ruleset. These shards are very PvP-oriented and are usually not for the beginning player.

After selecting a shard, click the right-facing green arrow in the bottom-right corner of the screen, and you will be taken to the Character Selection screen. Click the "New" button to start the character selection. (NOTE: After 7 days have elapsed, you can also delete characters from this screen.)

You will now be taken to the "Choose a Trade for Your Character" screen, where you are prompted to either choose a trade or choose an advanced template. 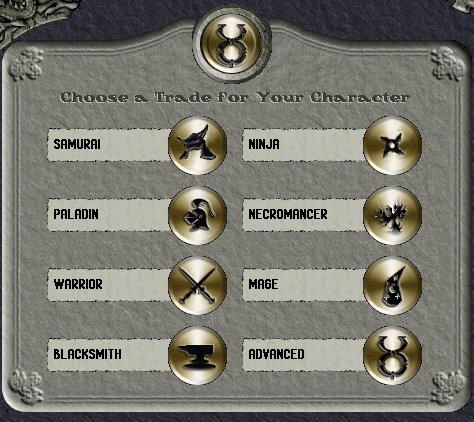 There are several trade templates you can choose from. They are:

The first seven choices are pre-made templates, where the skills and statistics common to those professions are chosen for you. If you have never played, or if you are new to MMORPGs in general, you may wish to simply choose a trade you think you might enjoy. If you hover the mouse over each choice, it will give you a general description of the profession. To make a selection, just click the icon beside the template name. This will take you to the "Character Name" screen.

The final choice is for the player who wants to make their own custom skill and stat selections. If you choose the "Advanced" icon, you will have to manually select the skills and stats you want to start your character with. 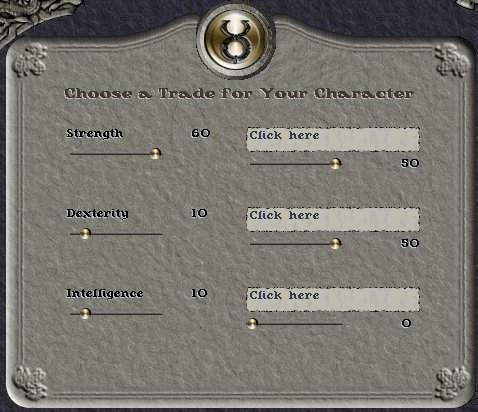 If you choose the advanced option, you will be able to allocate points to various skills and stats. This is the beginning of your character's template. While this can vary as time goes along and your character develops, you should understand that your character can have a maximum of 700 skill points and 225 stat points (NOTE: without using Stat and/or Power Scrolls). You should keep this in mind as your create your starting skills and stats.

Keeping the 700-point cap in mind, you need to begin to think about your template. While nothing is set in stone, it is a good idea to have an idea of where you want to go. You may not know which 7 skills you want to bring to 100, but you may know that you want to create a mage, a blacksmith, a swordsman, etc.

The following are examples of general character types along with skills that are commonly associated with that character class. Generally your template will consist of 7 skills, each maxing out at 100 point per skill.

A couple of good combinations for Crafters are usually: Blacksmithy/Arms Lore, Tailoring/Tinkering. If you want to use all these skills, a good recommendation is to set two of these to 50 each, so that you can reduce some time and gold needed to gain these.

Once you have selected your skills from the drop-down menu choices, click the right-facing green arrow in the bottom-right corner of the screen, and you next choose your starting statistics.

Stats, an abbreviation of statistics, refers to the 3 statistics all characters have in varying amounts, as follows:

Depending on what combination of skills you chose, or what you think your character will ultimately be, you have a broad range of selection for your stats.

For instance, if you are going with a mage or scribe as your primary skill, a good recommendation is to start with at least 25 Intelligence. Strength is fairly easy to gain with Lumberjacking, so may not be as important to max out here. Dexterity is necessary for many crafting skills.

Once you have made your choices for your stats, click the right-facing green arrow in the bottom-right corner of the screen, and you will be taken to the "Character Name" screen. 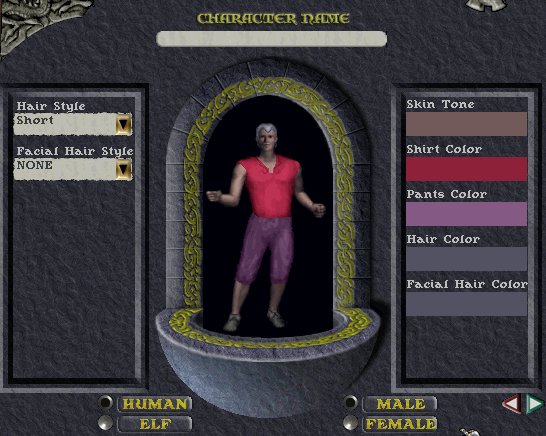 Here is where you get to decide what your character will look like in the game. You will need to select the Race, Skin Tone, Hair Style and Hair Color, Clothing Color, and the Name of your character.

There are quite a few differences between the races, so it is recommended that you read up on these and the pros and cons of each before creating your character.

While there does not appear to be a difference in skills or stats, there are more armor choices for the female character. For instance, Human females can wear any type of human armor, but Human males cannot wear female leather skirts. 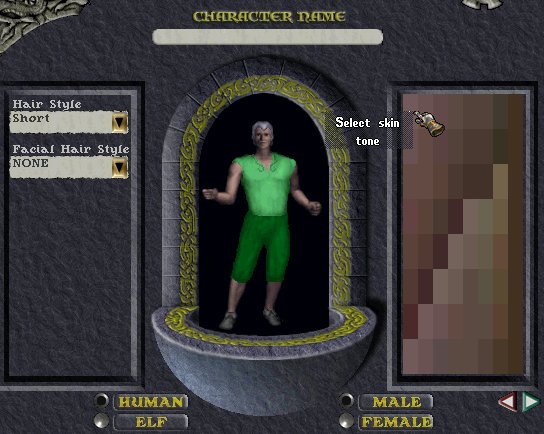 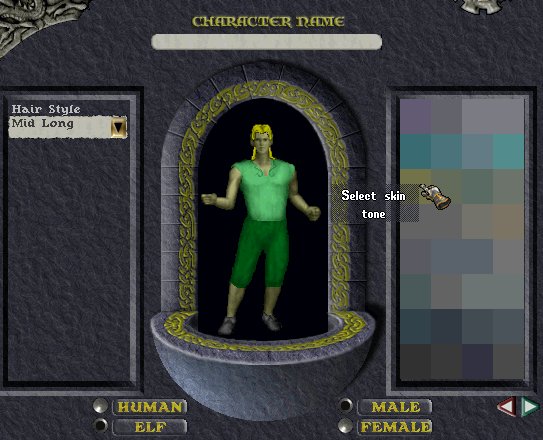 There is no difference in game play for skin tone, so choose what you like. 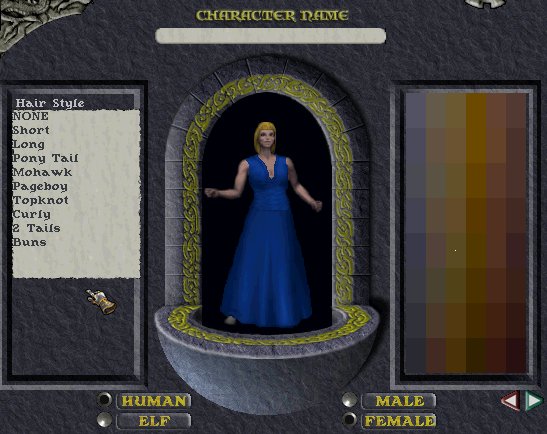 NOTE: While you can change your hair styles and colors in-game, some hair colors are only available at character creation.

Once you are ready, click the right-facing green arrow in the bottom-right corner of the screen. If you chose a pre-made template, your character will automatically appear in Haven.

If you chose "Advanced" and selected your own skill sets and stats, you will be taken to the Map, where you can select a city to begin in. What you choose here does not matter, as you will still end up in Haven.