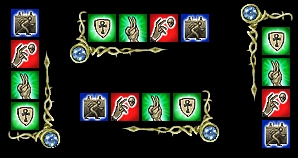 Erp! I've got to start working out. I just can't carry this shield anymore.

Buff Bar, Buff/Debuff Gump, and Buff/Debuff Icon System are all terms that refer to a game interface. The Buff Bar allows players to identify certain magic effects that are currently affecting their characters. In addition to displaying an icon for the effects, mousing over an icon will show a tooltip that displays the name of the effect, a short description, and a countdown timer that tells when the effect will expire.

Display of the Buff Bar can be turned on or off via the blue button in the upper-left corner of the Character Status Menu. The buff/debuff icons can be aligned in four different directions. The Buff/Debuff Gump can be positioned anywhere inside of the UO window.