Journey to the Athenaeum Isle

Journey to the Athenaeum Isle is a quest given out by Queen Zhah who can be found inside the Royal Palace. The quest became active with Publish 70.0.5 and it is part of the Echoes of the Past event cycle. It can be completed more than once per character.

Queen Zhah at the Royal Palace

As you know, my people have suffered the incessant onslaught of the Void and its minions for as long as Gargish history exists. Protecting Ter Mur from the darkness, and its desire to consume the land completely, is a burden passed down from one ruler to another upon ascension to the throne. During my rule, I have been more successful than my predecessors but, now, I fear that the greatest evil both myself and my people have ever faced is about to return.

Long ago, Ter Mur was assaulted by the most formidable and horrid servant of the Void it had ever faced. Called Scelestus the Defiler, this daemon proved invincible to any weapon or spell that was utilized against him. I was unable to defeat him and was forced to imprison him instead. Sadly, my own daughter was caught in the spell and stands imprisoned next to the daemon. It has been this way for a thousand years now.

I have received word that the isle which houses the daemon, Athenaeum Isle, is once again swarming with daemons. Based on the description provided to me, I believe these are the minions of the Defiler himself. They have no doubt crawled out of the dark in anticipation of their master’s return. In truth, the prison I placed him within will not last forever.

I ask that you journey to the southwestern flight tower, adventurer, and head further southwest towards the shore. Near the water's edge, you will find an ancient teleport site which will transport you to the isle. Once there, please slay as many of these monsters as you can. Additionally, please keep your eye out for any documents that you may discover. This isle was the former home of our Great Library and, when it fell, not all of the documents and books were able to be taken to the new location here in the Royal City.

Slay the beasts and return to me any documents that you acquire.

Be careful, and go with honor. 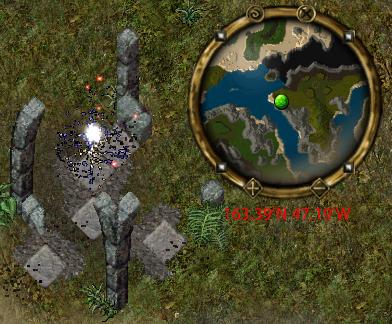 Ancient teleport to the Athenaeum Isle

The teleporter to the Athenaeum Isle is located at 164° N 47° W in southwest Ter Mur. The island is filled with Minions of Scelstus which have 100% resistance for cold and poison based attacks and are bardable (unlike Blackrock Golems) with 160.0 barding difficulty. They also have a powerful breath attack and the Hit Life Leech property backfires as the tainted life force energy damages you as your body tries to absorb it. The

Gargish Documents can be found as loot from the corpses of these daemons. Note that being one of the top attackers is enough to have a slay count and also not all daemons carry the gargish documents.

When you have slayed all 10 creatures and gathered all ten documents, mark the documents as quest items and return to Queen Zhah.

You have returned! I cannot thank you enough for the service you have done me, adventurer.

The documents that you have retrieved may seem unimportant to you, as they are naught but random letters and doctrines. But they each represent an echo of the past, musings of our ancestors. I had always meant to return to the former library and retrieve all that I could, but I had thought they were safe, gathering dust in the ruins. I will immediately have these cleaned and placed in the Great Library here in the Royal City.

As thanks, I offer you this book. It is the chronicle of my life, of the arrival of the Defiler, and a history of my people. In hopes that you will be granted further understanding of the impending danger we suffer, I offer it to you as a gesture of friendship and goodwill.

Thank you again, on behalf of the Gargoyle people. I may have need of your assistance at another time, should you be willing to come to my aid again.