An imaged captured from one of her appearances

Minax is an important NPC villain in the history of Ultima. Also called the Dark Mistress, Minax first appeared in the single player game, Ultima II: Revenge of the Enchantress, which was released in several formats from 1982 through 1985. She was also featured in the manga, or Asian comic book, Ultima: The Terror of Exodus. For information on Minax from the single player game, see Minax (Ultima).

"The climax was the devastation of 2111, Minax's greatest triumph, when ancient civilizations born of love and beauty, wisdom and reason, turned on one another in hatred and destroyed most of the very earth that had nurtured them. If it were not for the time doors, we would not be here now. Only the ability to move in time enabled any living thing to survive..."

-- from the writings of Lord British

Minax was the young female apprentice and lover of Mondain, also a great villain of Britannia. As revenge for her mentor’s death, Minax has sought to destroy the world.

She has been seen in-game on several occasions, such as when she led an undead invasion of the City of Trinsic and during the Age of Shadows expansion when she led a series of attacks on Britannia. During that event cycle, she was seen in the bottom level of the dungeon Destard, wielding a powerful artifact called the Doom Kiss.

While she made periodic appearances during in-game events, Minax's connection to Britannia was mostly limited through communication notes from the Travesty, the Peerless of The Citadel located in the Tokuno Islands.

Her followers were once part of the now defunct Factions system that was eliminated with Publish 86.

The mysterious whereabouts of the Enchantress Minax and her minions has been revealed with the opening of the moongate to the Valley of Eodon. She resides in a clifftop fortress known as the Shadowguard. 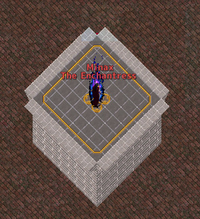 She has no actual involvement other than ordering her four lieutenants to battle while she taunts nearby players from her perch on the roof.