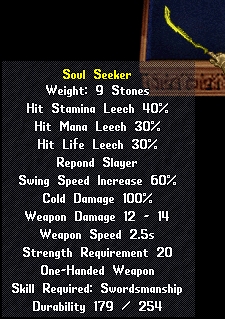 The Repond Slayer group is a Super Slayer to all humanoid creature types.This Slayer does double damage to all of the creatures in its category. It has four lesser slayers, Goblin Slayer, Ogre Slayer, Orc Slayer and Troll Slayer, which do triple damage to the creatures on their respective categories. The only item having the Goblin Slayer property is the Talisman of Goblin Slaying. Its opposite slayer group is Undead Slayer.

The word "Repond" is from early Ultima lore, specifically, Repond was a spell in Ultima III for use against orcs, trolls, goblins and other humanoids. Conversely, Pontori was a spell used against undead, Sanctu was a healing spell, etc. These words have no real classical or literary origin and are more like pseudo-medieval Latin-sounding gibberish words created by the game developers.

Though powerful against humanoid-type creatures and beings, this slayer has no effect when fighting other Players. Though it did some years ago, its effects in PvP even then were often exaggerated. On the Internet site UO Powergamers, an avid PvPer was once quoted as saying: "Every once in awhile some red will come at me with [a repond slayer weapon]], thinking it's going to kill me in 2 hits or something. Whereupon I will take it from him and ram it up his ass."