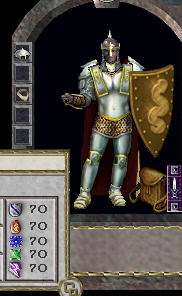 Resistance is a generic term used to indicate the five areas in which damage is reduced and armor is designed to resist. A character's individual resistances are displayed in the Character Status Menu, as shown in the image at right. They are, from top to bottom:

For Humans and Gargoyles, resistance is cumulative up to a maximum level of 70% in all five areas. As shown to the right, the levels are maxed out when the full Virtue Armor Set, which can add to 70+, is worn. However, an Elf enjoys an Energy Resist maximum of 75%, not 70%; the rest of its resistances are capped at 70%.

In addition to armor and any applicable jewelry worn by a character, resistance is affected by:

Unless modified, melee and ranged weapons cause physical damage. When a weapon possesses damage modifiers, the sum of any damage types will total 100%.

The type and amount of resistance a piece of armor imparts depends on:

Both rings and bracelets can have resistance. The Ring of the Elements is an excellent example. In addition to this, Gargish Necklaces and Gargish Earrings provide resistance.

Veteran Reward cloaks and robes have +3% Physical Resistance each.

Prior to the release of Ultima Online: Age of Shadows, there was damage and armor. Publish 17 removed the Armor Rating (AR) and the related defense and damage enchantments from the game.