The Exodus Encounter is a peerless system introduced with Publish 79. 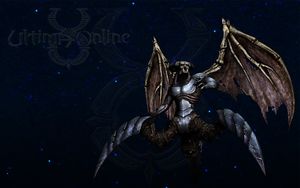 Exodus was a villain in Ultima lore, the spawn of the evil wizard Mondain and consort Minax. The Awakening epic story-arc revealed that Exodus captured Lord Blackthorn and built a mechanical facsimile to replace him throughout the events of Lord Blackthorn's Revenge. During the Call To Arms event, Exodus took advantage of civil unrest and a weakening of the boundaries between planes to attempt to subvert Britannia. Various clues soon pointed to Ilshenar and specifically the Exodus Dungeon. This invariably concluded with adventurers assaulting the dungeon, led by a recently returned Dupre, and destroying Exodus in a final confrontation that was notable for the introduction and distribution of a rare item, the Scroll of Valiant Commendation.

It is revealed with Publish 79 that those still loyal to Minax and Mondain's creation are working eagerly to rebuild the mechanical demon to summon him once again into Britannia. An Arch Zealot of Exodus appeared outside of Ver Lor Reg in Ilshenar, encouraging the adventurers to perform the Summoning ritual:

"Can you feel it? Can you feel the awesome power that emanates from this place...surely Lord Exodus will join us again soon, that's why you're here isn't it? To perform the Ritual?" 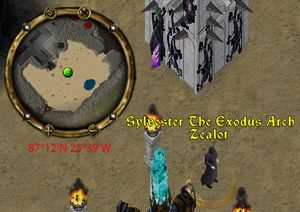 Four keys are needed for the Summoning ritual:

that can be obtained by following the path of:

There is a chance for the keys to drop into players' backpack upon slaying minions of Exodus or Dupre's men inside the Exodus Dungeon:

These keys can also be found inside the

locked and trapped containers hidden inside the Exodus dungeon. In order to reveal them, they need to be searched using the Detect Hidden skill once the message "Your keen senses detect something hidden in the area.." appears. These containers also contain about 2,000 gold coins, random gems and occasionally random imbuing essences, potions, etc. The keys can also be stolen from the Exodus Zealots.

The keys can be crafted by using Tailoring, Alchemy, Carpentry, Inscription and Blacksmithy. Check each key's page above for the crafting requirements. 20 Small Pieces of Blackrock, 6 Abyssal Cloth, 5 Taint, 5 Crushed Glass, 5 Dark Sapphires, 3 Fire Rubies and 2 Blue Diamonds are needed, together with other regular crafting ingredients, to craft all four keys. 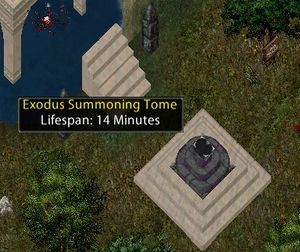 In order to perform the Summoning ritual, you must first party up with at least one other player. Note that you do not need to party to acquire the keys and each party member should have his or her own set of keys. The Summoning ritual can be performed at any shrine in Trammel or Felucca, except the Chaos shrine. Gargoyles need to hand the Arch Zealot the human

Exodus Sacrificial Dagger to receive the

To initiate the ritual:

All party members will then be teleported to Ver Lor Reg. 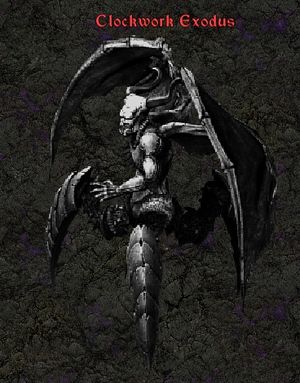 Clockwork Exodus summons death vortices that drains mana and stamina. It also has an the aura energy that damages nearby players. Clockwork Exodus is extremely fast; almost mount speed and is nearly impossible to outrun.

Like Champion Spawns, a gold explosion takes place depositing gold on the ground once it is slayed. Once Clockwork Exodus is defeated, players will have a chance to receive one of these rewards (Line-Through text shows the original non-replica item's properties, check the individual item pages for more information):

Players will be teleported to a random shrine in Ilshenar if they do not leave Ver Lor Reg within 10 minutes of Clockwork Exodus' death.