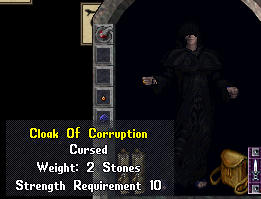 Despite the name, the Cloak of Corruption is a pure black Elven Robe. To date, it has only appeared as a drop by Shadowlords during the Blackrock Detector event. This event was Part II of the larger event arc Warriors of Destiny. To acquire one you must have been one of the top 3 damagers on a Shadowlord. One of the best ways to achieve this was to cast the Armageddon spell, which dealt damage equal to half of the Shadowlord's current total Hit Points.

When worn, the item has different effects depending on whether or not your character is in the Ethereal Void (and the area beyond the Moonglow Rift is considered part of the Void).

Worn Outside The Void

A character's hit points, mana, and stamina will be drained away. The reduction rate is approximately -14. The draining effect can be countered if enough regeneration items are equipped; though it will not take a character's reserves below one. Tests have indicated that even the combination of the Bracelet of Health (Hit Point Regeneration +10) and the Ring of the Vile (Stamina Regeneration +6) are not enough to counter the stat drain of the item.

Worn Within The Void

A character's hit points, mana, and stamina are rapidly restored.

Regardless of where worn, the robe drains karma at a rate of approximately -500 points every 30 seconds. In roughly an hour it will take even a Glorious character to Dread level. The Cloak also can cause otherwise passive animals and monsters to be particularly aggressive against the wearer. Stealthers have reported Dark Wisps, Fallen Warriors, and Fetid Essences following them even while stealthed. However, this phenomenon ceases when the robe is removed. Due to the Cursed property, the Cloak can not be Insured or Blessed, thus actively using it is not without risk. However, Necromancers may find some extra value for it as a quick way to lose karma.

When originally worn outside the Void, the robe had an extra feature. Every two seconds a character's stamina and mana would be set to an amount either equal to their maximum or your current hit point level, whichever was lower. This meant that even the most draining spells could be cast over and over at effectively no cost, or great weight carried at high speed; albeit regenerative armor or frequent healing would still have to be used to keep the character at full power. This feature was removed a few days after the item's introduction.

On 21 April 2008, Draconi stated that the Cloak has the following powers.

Attempts to aggro a large area around the player

To sum: A dread's best friend, or a hero's shield in the unknown.