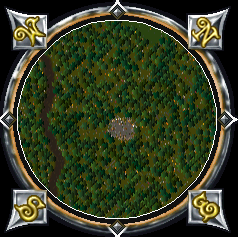 The Hag's Assistant is a classic quest that is located South East of the Grove of Love.

Talk to Grizelda the Hag and you will be sent off looking for one of her apprentices with warnings of the vile Zeefzorpul. She directs you to the road west of the ruins and up the road towards Yew's graveyard. Follow it north until you find a charred corpse (usually past 2 guard outposts) and be very careful to stay on the path. Opening the corpse continues the quest.

Return to Grizelda and report your findings. Once you tell her of the demise of her apprentice, she sends you out to find Zeefzorpul and return a scrap of parchment to her. To do this you will need to slay some Imps; Once you have slain enough you will be given a map and a Magic Flute. Head to the location indicated on the map and, once there, play the flute to reveal Zeefzopul. He will snatch away the flute but return the stolen recipe and then disappear. Return to Grizelda with the recipe and she will then task you with completing her shopping list of items for the recipe.

This next step consists of three random items from the following list:

Can be killed in great numbers near New Haven.

Chickens are found in various farmland and forest areas.

Sheep are found in various farmland and forest areas.

Great Harts and Hinds are found in various forested areas.

Slime are easily harvested in the Bog of Desolation.

Lava Lizards are easily harvested in the Rat Cave.

Spectres and Ghouls can be found in most graveyards.

Use a Shovel or Pickaxe on a grave in a cemetery.

Found in most dungeons. Use a bladed weapon on a red mushroom as if you were skinning it. There is also one conveniently located just in front of the Hag's house.

Use an empty pitcher on a patch of swamp. The quest objective will be fulfilled but the pitcher will remain empty.

Travel to Buccaneer's Den and visit The Pirate's Plunder. Talk to Captain Blackheart the Drunken Pirate. You will need to don a tricorne hat (pirate's hat) and drink at least 5 Pitchers of Liquor.

Purchase a spyglass from a shipwright and use it to obtain the chart. If you are told it is not dark enough, you must wait until 5pm game time.

Once you have all of the ingredients required, return to Grizleda to complete the quest. There is a timer (5 mins?) before you can take the quest again.

Only awarded if you are drunk, via Captain Blackheart or any other means.

Used to activate the Strange Contraption located inside the Solen Hives.