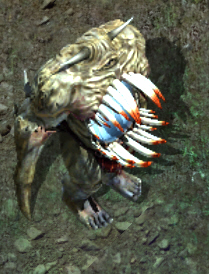 As its name implies, the Devourer of Souls feeds off the souls of its victims. With a wide, gaping cavity that reaches from the middle of its head to the bottom of its torso, it attempts to capture its prey by extending its ribcage out and drawing the soul of its target within the dark hollow of its body. This beast has a rapacious appetite for fresh souls and, thus, is extremely aggressive and quick to attack any adventurer that should cross its path in Dungeon Doom. With brute strength and a high level of magery at its disposal, it'll take some cunning tactics to defeat this foe; although, rumor has it that cold and fire can be quite effective against it in combat.