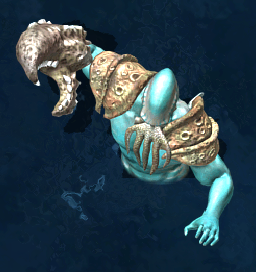 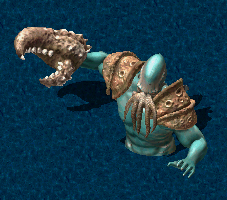 A Scalis can be summoned by tossing a

Fabled Fishing Net into the water that either pull up Sea Serpents, Krakens and Leviathan or Scalis. GM Fishermans have a 25% chance to spawn Osiredon the Scalis Enforcer. Cannons on ships can also be used against them, although unlike any other creature currently in the game they can damage ships in return. Additionally, they will toss eels on board when ranged attacks are used against them.

Osiredon has high resistance against most types of damage, making him difficult to hurt. Also, similar to Corgul the Soulbinder, Osiredon the Scalis Enforcer activates a tainted life force aura which can cause life leech options/skill (i.e. Vampiric Embrace) to hurt the player rather than heal, making Sampire template relatively useless. One working method is to use Cannonball from Cannons, which will deal approximately 650 - 2230 damage (produced by an Orc Ship using Heavy Ship Cannons).

Shortly after the launch of the High Seas booster, fiction regarding the Scalis was released.