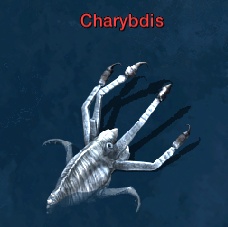 Charybdis is a sea monster that can be summoned by using a special spyglass called the Oracle of the Sea and a special fish bait. The summoning is limited to once every seven hours per shard. although the Oracle can only generate a new one if the previous isn't raised correctly once every 24 hours.

Once the Oracle is used, Charybdis will be placed somewhere randomly at sea on the sub-server the Oracle was used upon; one sub-server however cannot host him at all, namely the one with Wrong/Cove/Minoc upon it. Using the Oracle on this sub-sever will fail to generate co-ordinates and instead report "The spyglass goes dark, it has failed to find what you seek."

In order to be raised from the depths, a Grandmaster Fisherperson must be holding both the Oracle of the Sea and a rod baited with Charybdis bait... attempting to fish with just the Bait will not generate the "bubbles" message, and Charybdis will not rise.

There is a 1 in 4 chance of summoning Charydbis at Grandmaster Fishing or above once all conditions are correctly met.

A bit more difficult than Osiredon the Scalis Enforcer: Constantly summons Giant Tentacles and casts spells. From time to time pushes ship damaging it at the same time. Most of the time it will keep distance from your ship. Hence, you need a character that can attack with spells or a ranged weapon. Charybdis can be hit with cannonballs; a Heavy Cannonball from a Britannian Ship did 1400 damage, but as he scuttles the ship, you soon will not be able to turn and line them up; thus either using an Ork ship for larger damage, or the Britannian for more cannon facings and thus more chances to hit him is advised.