Use Best Weapon Skill (UBWS) is an item property that is found on weapons. It was introduced with the Age of Shadows expansion.

It allows you to use the so-labeled weapon as long as you have a weapon skill, regardless of what it is. For example, the Blade of the Righteous artifact sword has this property, and thus can be used by someone with Fencing or Mace Fighting, as opposed to only Swordsmanship. Wrestling does not count towards Use Best Weapon Skill.

Skill points "gained" via the Use Best Weapon Skill property do count towards your ability to execute Special Moves (unlike those gained via the Mage Weapon property).

Archery is excluded from Use Best Weapon Skill. Though some bows spawned with the property shortly after the release of Age of Shadows, this was an oversight. A publish stopped the spawn of such bows. However the property remains on some already spawned. These bows are considered rare. It has been hinted that this may eventually be replaced with the Lower Ammo Cost property. 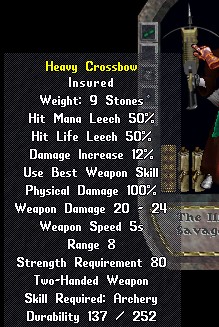 How does it work for different skilled chars?

Chars with other weapon skills can use the special moves.

A mage needs Mage Weapon attribute applied and the char has to have additional low tactics(30|60) and at least a weapon skill(fencing|sword|mace) in the 90th. Then both special moves may be used by a mage.

Here is a list of artifacts and other items which have Use Best Weapon skill property.

These are rare items which were usually from special events.

The following resources are required to imbue Use Best Weapon Skill: