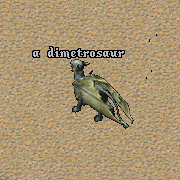 Dimetrosaurs are usually found roaming the northern swamps of the Valley of Eodon. Those found at the Dragon Turtle Champion Spawn are the same, but have their strenght, hitpoints and wrestling significantly lowered.