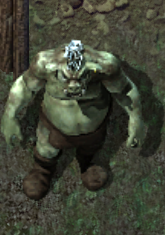 Orcs are the oldest and fiercest foes of humanity, but these days have been largely driven into Underground refuges. They have a face somewhat like a pig and a muscular, man-like body. It has long been said that they eat the flesh of man, but I believe they harass man for his gold, not for his meat. They are a cruel and rapacious lot, and the surface is better for their absence, but there are those who say that we may expect a great resurgence of orcish aggression in the near future.

For more details on the Orc race, click here.