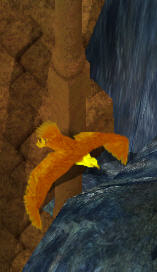 Pyre is a named phoenix that spawns only in the Labyrinth. It has an area effect that deals Fire Damage and reveals stealthers. While not very aggressive, Pyre is fast. It can: fly over walls and other obstacles; poison its foes; and deliver two Special Moves: Bleed Attack & Paralyzing Blow.