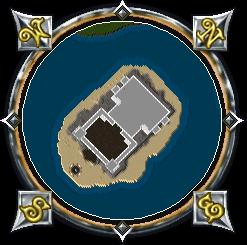 Reg Volom is the home of the Ethereals. The island's only building is the Etheral Fortress, a pristine ediface of pure white marble. There are only 4 Ethereal Warriors in residence on the island. However, there are several types of Undead under the fortress in an area commonly referred to as Spectre Dungeon.

Located over water, it can only be accessed through a teleporter found in the Spider Cave.

There appears to be some ancient relationship between the Ethereals and the Gargoyles; note the name of the Gargoyle city, Ver Lor Reg. Reg is olden tongue for home. Absent the word for home, which is used by both races, we still are left with two rather similar words: Volom and Verlor. Could these words have a common ancestral origin?

The island is perhaps more known for where you can get to from Reg Volom, rather than what is in Reg Volom itself. In the Ethereal Tombs, there is an immovable scroll on the floor. Standing at that point, any character who repeats the words written on the scroll, namely "masteropenthydoor," is instantly transported to the [insert name here] dungeon (where Inu was briefly held).

There is a passage to the Ethereal Tomb at the North end of the fortress; simply walk onto the black area. The tomb is filled with: Ghouls; Shades; Spectres; and Wraiths.